Hey guys , today Teacher retired and here is my write-up about it. I don’t have too much to say about this box. It was an easy regular machine , We will exploit an authenticated remote code execution in a vulnerable version of a web application called moodle to get an initial shell on the box. And for privilege escalation we will find a directory which permissions are set to read , write and execute by anyone , and from there we can create a symlink to /root or anything else we want to access. It’s a linux box and its ip is 10.10.10.153 I added it to /etc/hosts as teacher.htb. Let’s jump right in ! 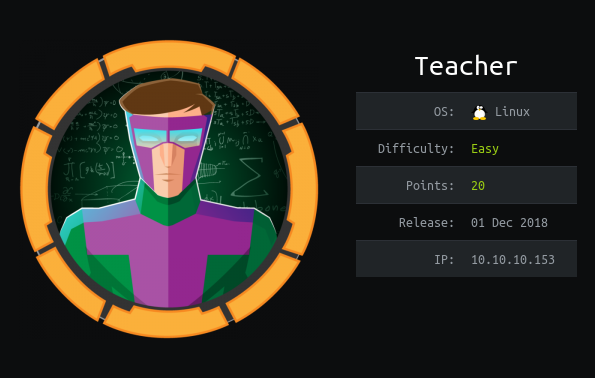 As always we will start with nmap to scan for open ports and services :
nmap -sV -sT -sC teacher.htb

We only see http running on port 80. Let’s see what’s in there. 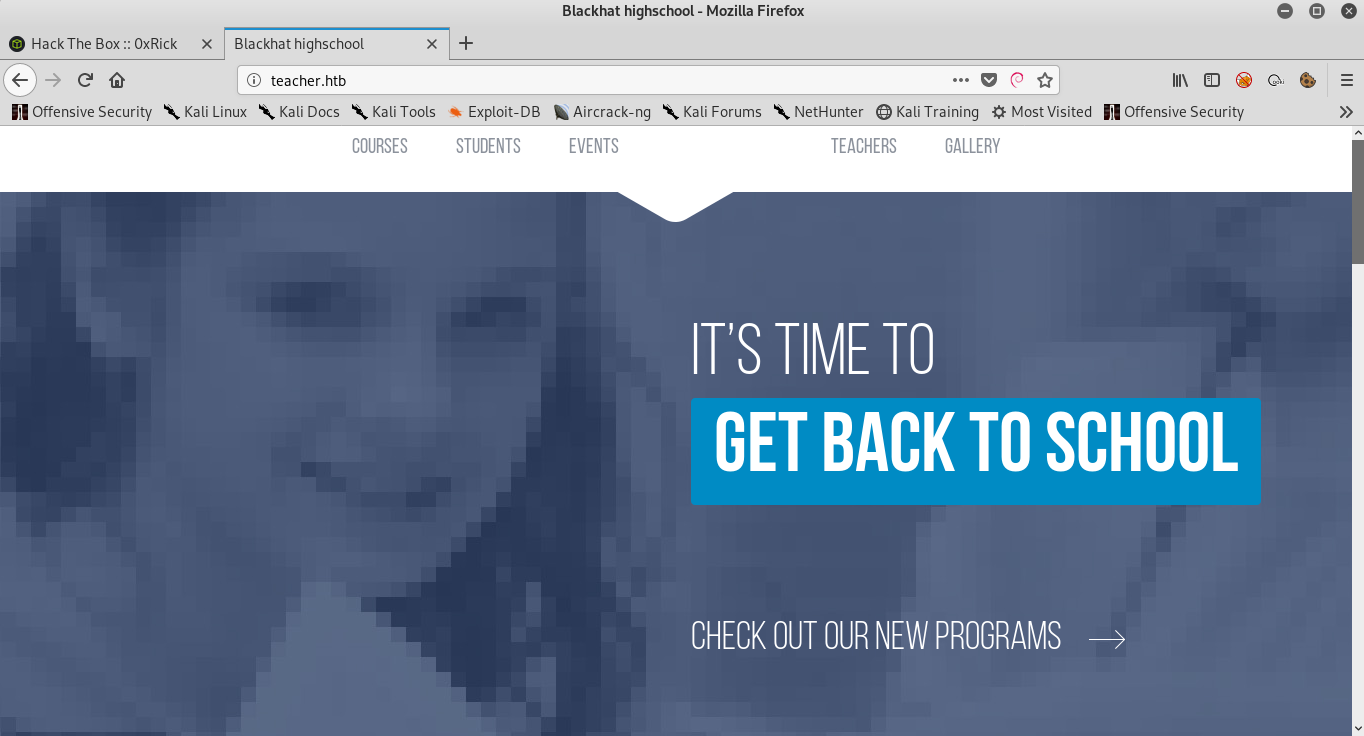 There is just a static website titled Blackhat highschool , I looked into other pages like Courses , Students etc… And also checked their source code. And on Gallery :

I found this line in the source :

for <img src="images/5.png"> there is an onerror attribute to print That's an F in the console. So I checked the console :

Corrupted file ? Let’s check if it’s really a corrupted image or it’s not an image at all :
curl http://teacher.htb/images/5.png

Nice , we have a username and a password but we still need to figure out the last character. But where will we use these credentials anyway ? I ran gobuster with /usr/share/wordlists/dirbuster/directory-list-2.3-medium.txt in the background and got some results , one of them was /moodle.
http://teacher.htb/moodle

On the login page there’s a guest login :

However I couldn’t achieve anything from that guest login.

We have the credentials but we need to figure out the last character of the password. I created a list of numbers , letters and special chars and printed them next to the password.

Since it’s a small list , I used burp intruder to bruteforce the password. Let’s intercept the request and send it to intruder : 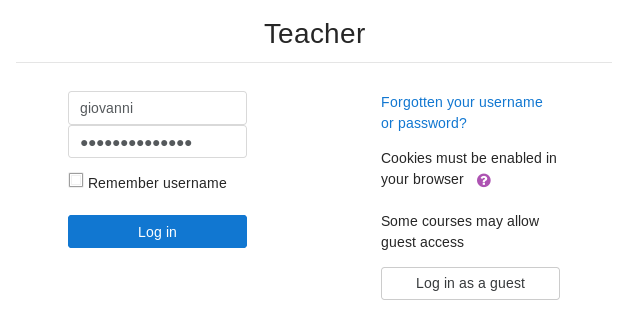 After it’s finished , all the responses were 870 bytes in length except the response of the payload Th4C00lTheacha#. 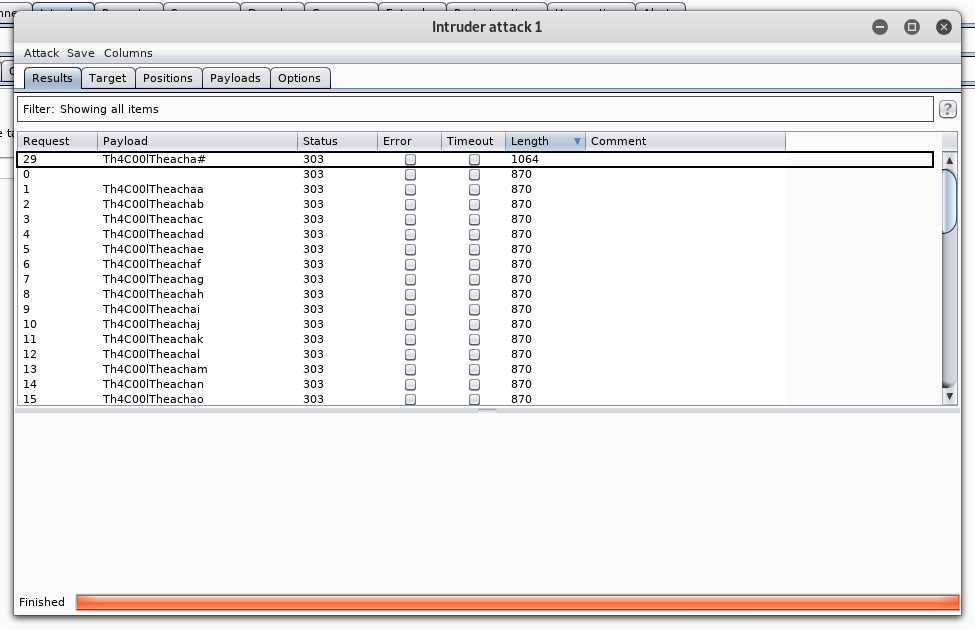 So probably this is the right password , let’s check.

It worked and now we are in as Giovanni

After some enumeration I didn’t find anything interesting , so I searched on Google and found this article. Let’s try to reproduce that vulnerability.
First , we will go to the Algebra course :

Then we will turn editing on : 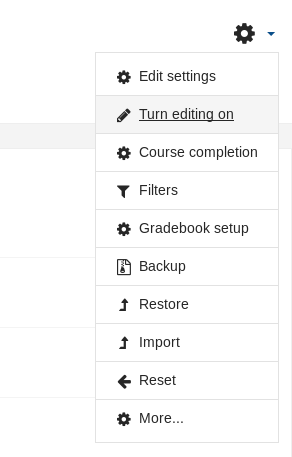 Then we will just fill in the required information : 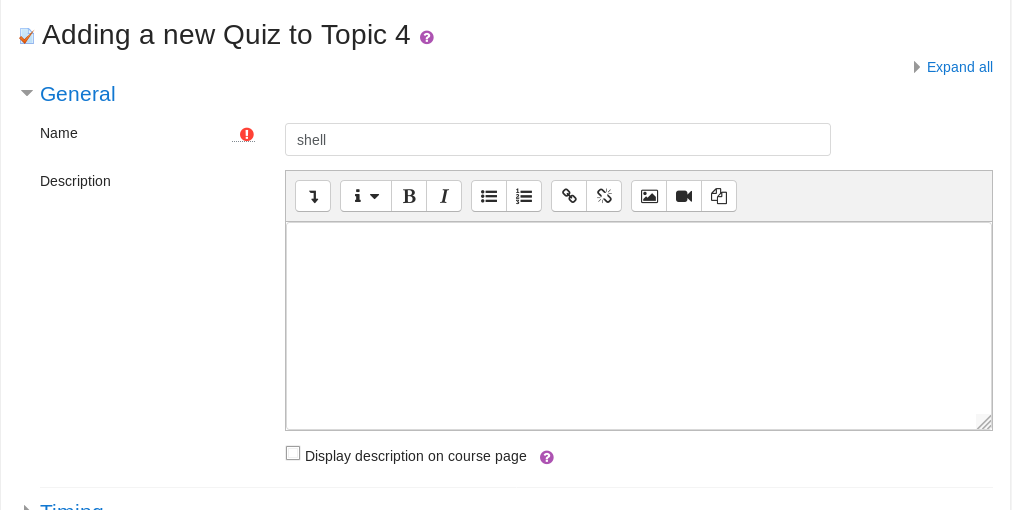 And add a new question. Question type will be Calculated :

Again we will fill in the required information : 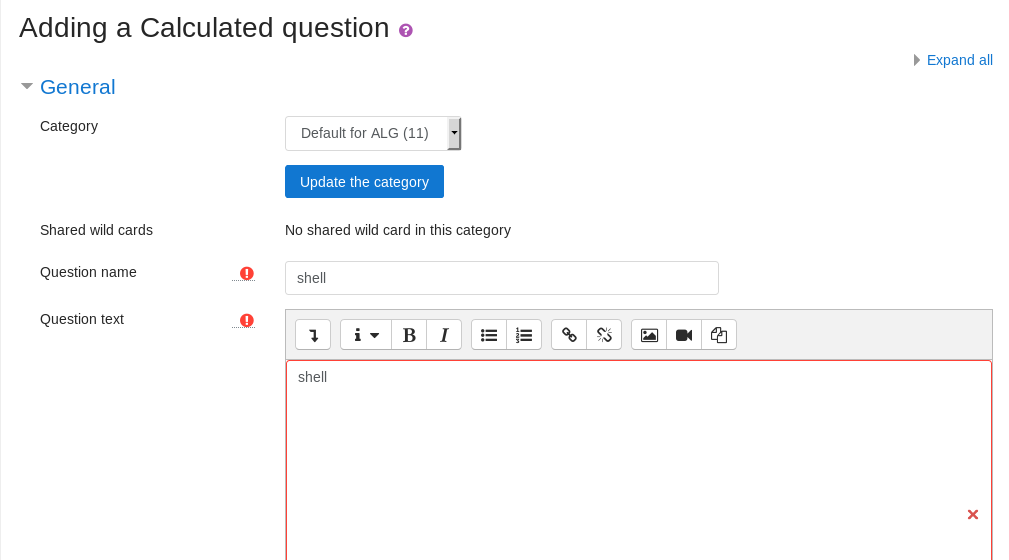 And finally we reach the actual exploitation , we will set the answer formula to : 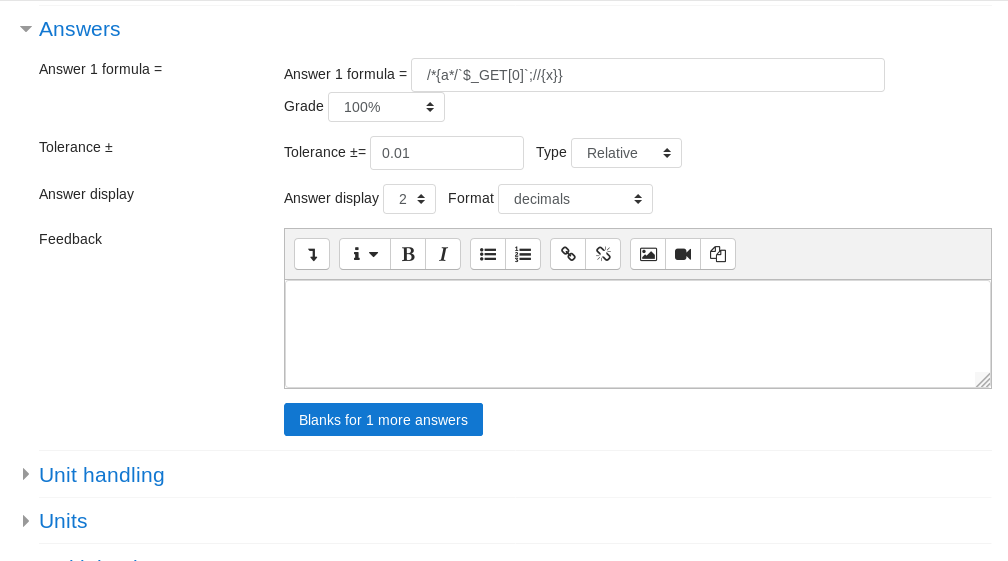 This will allow us to pass system commands through a url parameter called 0 , More info about how the exploit is working can be found in the previously mentioned article.
After saving the changes we will get this page : 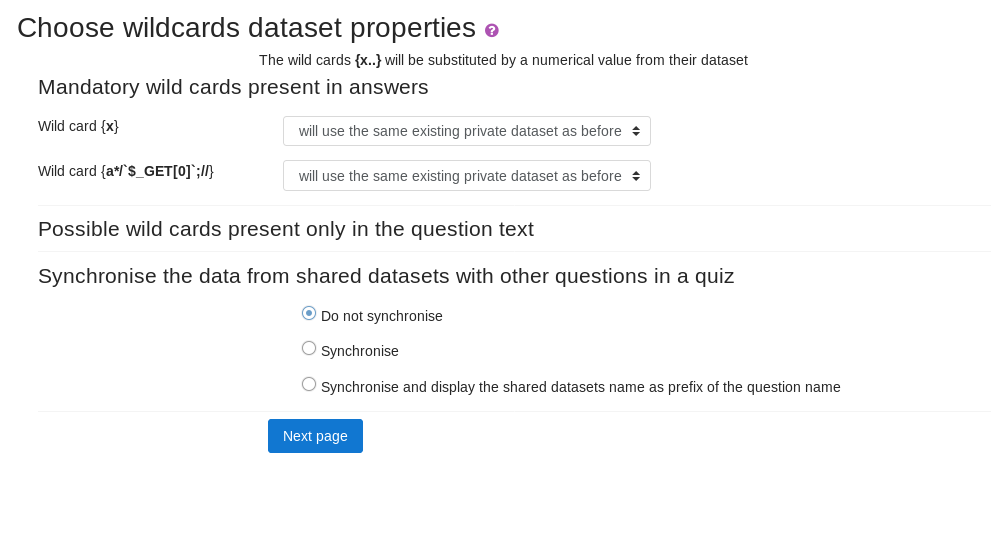 We will click on Next Page to finally get to the vulnerable page : 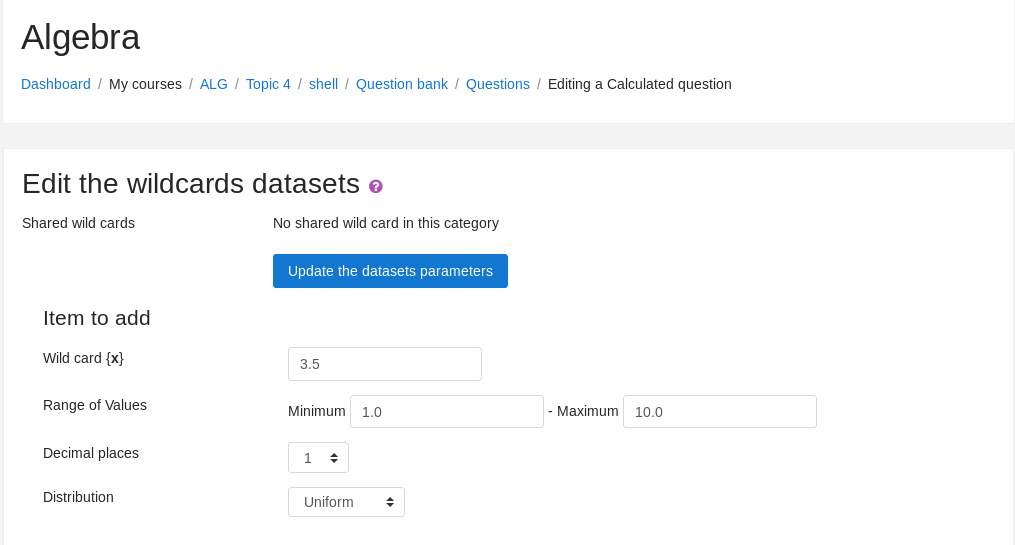 Let’s add the parameter 0 and get a reverse shell :
Shell :

Note : the payload is url encoded. So final payload will be :

After sending the request , our listener gets a callback. And we get a reverse shell as www-data :

There is only giovanni on the box and we can’t access his /home directory as www-data.

Back to /var/www/html/moodle , I wanted to check config files and other stuff to see if there are any information that can help. And in config.php I found database credentials : 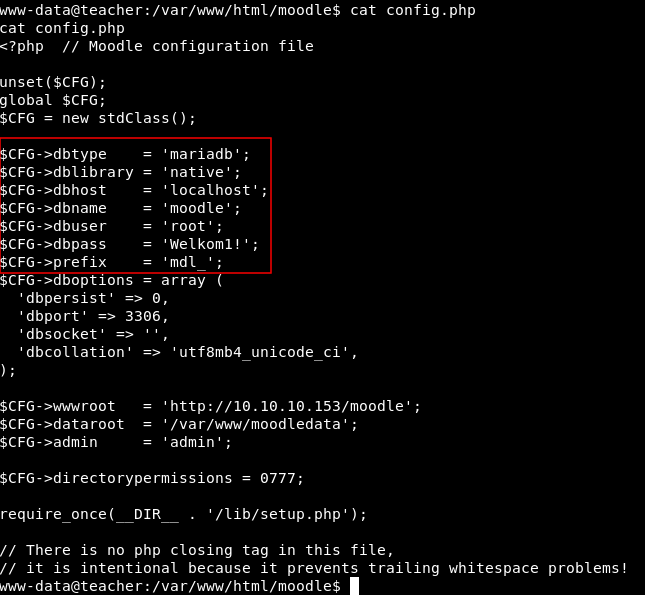 We are not in any database [(none)] , Let’s list the databases : 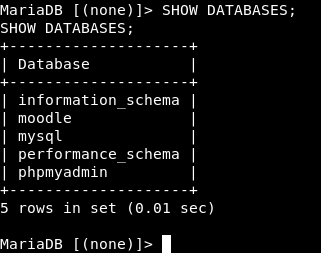 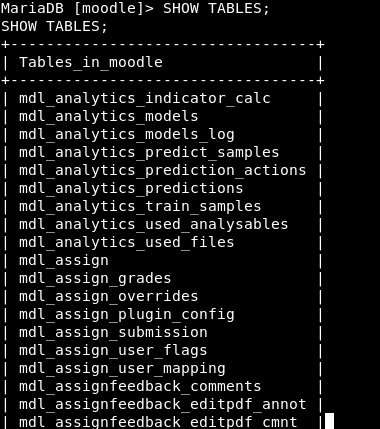 A lot of tables , but an interesting one is called mdl_user :

We didn’t get the best output :D but anyway I looked into it and found this md5 hash :

And its name is Giovannibak , probably a backup for giovanni’s password. crackstation was able to crack it :

The password is expelled, we can su to giovanni

Now we own user.

777. Ability to read , write and execute anything on the system

In giovanni’s /home directory there is a directory called work which has two directories courses and tmp. Nothing Special.

After a lot of enumeration I found in /usr/bin a script called backup.sh : 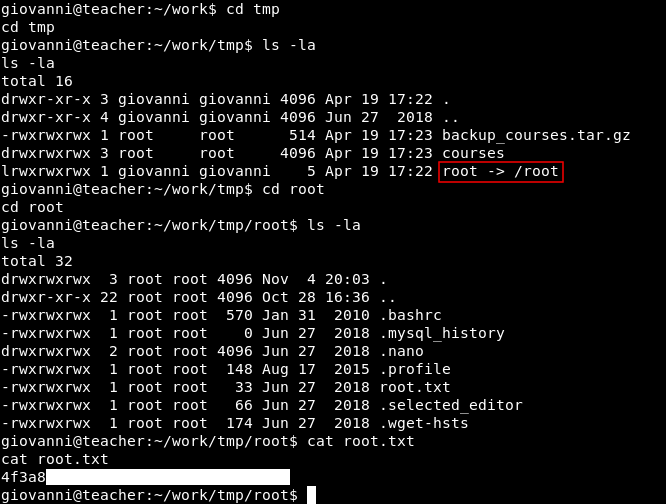